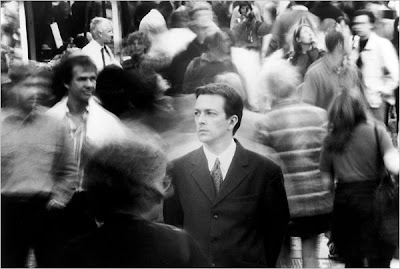 
Before he sold out, Christopher Nolan was much stranger. At least, his films were. While Inception, The Dark Knight, The Prestige, and Batman Begins are all dark and interesting, his early films were weird and uninhibited in a way that Hollywood could not allow. You may remember Memento, which was odd yet popular, with it's twisted storyline and editing. But two years earlier, Nolan directed Following, a prototype film in which he experiments with the style that would ultimately gain him fame, fortune, and, ironically, following.

This black-and-white neo-noir film breaks all the rules of storytelling. The plot is cut into three sections which I like to call Scruffy, Shaven, and Shaven/Beaten Up. Then the three sections are scrambled up with one another in a seemingly random order, allowing the audience to often see what happens before we know why it does. Eventually, the story is pieced together and the climax is revealed as we watch a young British man naively enter into the criminal underground and immediately get in above his head. With only one character having an actual name, this whirlwind of a film leaves you both guessing and waving the white flag of surrender.

While Following might be both confusing and darkly odd, it's enjoyable thanks to, not in spite of, those things. The plot does not make any sense until the end of the film, but at only one hour long, it doesn't take forever to figure out. Once the twists are figured out and the points are revealed I was left thinking, "Oh ...cool," but not much else. This film won't blow anyone away, but it deserves credit for being an original creation and for being a stepping stone toward a much better film, Memento.

Some films feel like good shorts but drag on too long, making them bad features. This film was a fleshed out short that stayed crisp while developing an intricate plot. It may not fit into any category, but it was still a clean and well-made picture. Nolan is much more than exploding bat-mobiles, and he proves it with his early works; check them out.