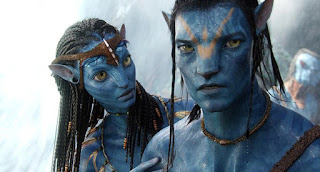 
Reduce, reuse, and recycle; the environmentalist motto. Director James Cameron (Terminator, Titanic) proved his critics right when they called his newest movie overtly environmental by following this motto to a tee. Instead of creating an original work, Avatar was constructed by recycling old props from old projects, reusing plots from mediocre movies, and reducing the level of acting talent and writing imagination needed to create a Hollywood film.

The story centers around Worthington, a wheelchair-bound Marine who travels to Pandora, a planet rich in natural resources but peopled by a savage race, the Na'vi. Transferring their minds into avatar Na'vi bodies, the humans mingle with the natives in order to convince them to let them harvest the natural resources of the planet (unobtanium), warning the natives that resistance will only give the human army a reason to destroy them. When Worthington falls for the Na'vi princess, Saldana (Crossroads, Star Trek), and begins to enjoy his life as a native, the situation reaches a boiling point.

If you think that you have heard this storyline before, you have. It was called FernGully. Complete with an ancient tree that the natives will die to protect, Avatar takes it's plot almost scene for scene from this 1992 animated film. In order to cover this theft up, Cameron adds in a dash of a few other movies as well, including the emotions of Dancing With Wolves, the soundtracks of Glory and Enemy at the Gates, and the set pieces of Aliens. Sigourney Weaver herself is no more than a glorified set piece, while Giovanni Ribisi and Michelle Rodriguez take their characters directly from Paul Reiser and Jenette Goldstein in Aliens. Cameron shows no originality in this film. From the characters to the music, the spacecrafts to the plot, everything is recycled.

The only positive that can be said about Avatar is that it is a great 3-D experience. Very special care has been given to making every scene beautiful, every moment epic, every shot visually stunning. If only the acting, plot, music, basically the film, could have been half as good as the movie, then perhaps Avatar could have been great. However, as much as I enjoyed the visual effects and the experience, the more I think about this movie the more I don't like it.