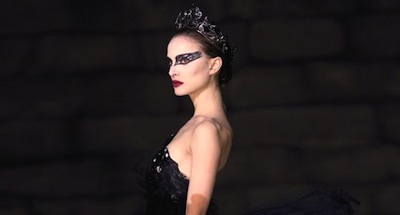 Going in to see this film I knew I would either love it or hate it; I've always had strong reactions to movies directed by Aronofsky. I couldn't stand Pi or The Fountain, but I thought Requiem for a Dream and The Wrestler were both excellent. His movies are either bizarre and unattainably selfish or gripping and frighteningly realistic. All that was left for me to do was decide which category Black Swan fit into best.

The plot is fairly simple. Portman (Garden State, Closer) plays a beautiful and precise dancer who is part of a company that will be performing Swan Lake. When his prima ballerina retires, company director Cassel auditions Portman for the role of the Swan Queen. The difficulty is that the dancer must play two parts: the virginal White Swan and the alluring Black Swan. As Portman attempts to embody both parts of the character in order to win the role, she is influenced by a free spirit dancer, Kunis (That '70s Show), her controlling mother, Hershey (Hoosiers, Last of the Dogmen), and her own inner demons.

Ultimately I was proven wrong, as Black Swan fit into both Aronofsky film categories and somehow came out original, clean, bizarre, frightening, sensitive, beautiful. Portman was excellent in every scene, seamlessly transforming into her character. Kunis was surprisingly good; sexy and relaxed. The writing and dialogue were simple, but smart. The tension in the film was non-stop, even nerve-wracking. I left the theatre, as did everyone, slowly; sitting for a long while after the credits, reflecting on what I had just seen and wondering what had just been done to me.

It seems an exaggeration, but this film is near perfect. It is a great thriller that didn't become cheesy and an artsy film that didn't become pretentious. Appealing to both critics and audiences alike, it has a legitimate shot at winning the Best Picture Academy Award.