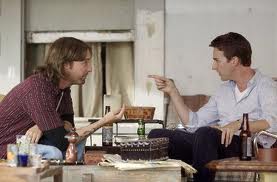 Essentially, this film was comprised of 'buts'. The title refers to W.W. (Uncle Walt), but also to M.J. (pot). Norton is a great actor, but he plays two characters. Sarandon is a great actress, but Russell is not. Nelson is a veteran actor, but an amateur director. Every positive sign is followed by a negative one, and we're left wondering which side will win out.

Edward Norton (Fight Club, Rounders) plays both a cultured college professor and his hippie pot-dealing twin brother. Tricked into returning to his home state of Oklahoma, he becomes involved in his brother's drug war against local Jewish magnate Richard Dreyfuss, in a very comical, very short, cameo. Meanwhile, Sarandon (Dead Man Walking, Bull Durham) plays the boys' mother and Russell (Felicity) plays the love interest, as the brothers become involved in what will, of course, become more than they bargained for.

As may be apparent from the description, this was an odd movie. Norton is a strong enough actor to carry two roles, but his performances both fall a little short. Nelson's attempt to mix lessons in hydroponics with lectures in philosophy come off as muddled and affected. A scene in which Russell quotes Whitman while gutting a trout exemplifies the awkward and cliche feeling that most of the movie had. It became quickly obvious that Nelson, who directed, co-starred, produced, and wrote the film, was in way over his head, and quickly turned to Movie 101 to get out of this jam.

Leaves of Grass was a dark comedy that was dark sometimes, funny sometimes, but mostly just uncomfortable and strange throughout. The plot was somewhat interesting, but the acting and writing just didn't support it. In essence, this movie could have been good, but it was not.