Movie Review - The Dark Side of the Moon 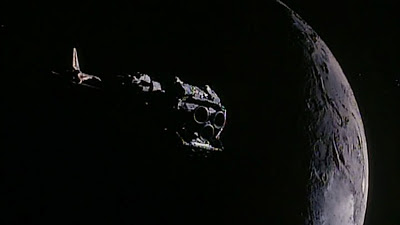 
James Cameron must have watched this movie at some point and had an epiphany; it's much easier to combine three existing movies than it is to come up with an original one. He used this idea in making Avatar, combining Aliens, Dancing with Wolves, and FernGully to make a film so bad that it made the former three films look good. Luckily, he had 3-D technology to dazzle audiences into ignoring a pirated plot and an abysmal script. The Dark Side of the Moon, unfortunately, did not.

The year is 2022, and American satellites have been outfitted with nuclear weapons. A rag-tag company of soldiers is sent into space to service a satellite and return to Earth. However, as they approach the Moon's orbit, their ship loses all power. As they drift toward the dark side of the moon, an ancient NASA spacecraft slowly flies near. When the spaceships link, strange occurrences begin, and the crew members blame each other. They start to wonder if the arrival of the mysterious spacecraft was there deliverance or their damnation.

Yes, it is just as bad as it sounds. From the opening Star Wars-ian credits, to the countless still shots of the moon split into dark and light halves, this movie was continuously poor. Not only was the acting horrible and the space research unbelievable, but also, this movie was a complete forgery. The majority of the plot was taken directly from Alien and the characters stolen straight from Aliens. And the Hal type computer, Leslie, was a poor imitation at best, not even good enough to be considered an homage to 2001: A Space Odyssey; just a cheap knock-off.

There was, perhaps, one redeeming quality: it was so terrible that it became a little funny. If that had been what the director was attempting to do, create a movie on par with Barbarella or The Ice Pirates, then some credit would be deserved, but I doubt that was the goal. In the end, The Dark Side of the Moon was just bad enough to be no good at all.