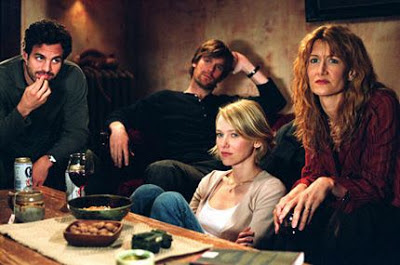 
In 1979, Andre Dubus wrote a short story entitled "Killings", which would be adapted into the film In The Bedroom in 2001. Similarly, We Don't Live Here Anymore is based on two Dubus novellas: one by the same name and the other entitled "Adultery". Perhaps it's obvious, but this film is not a comedy.

We Don't Live Here Anymore is a film of only four characters. Ruffalo (Windtalkers, Eternal Sunshine) is married to Dern (Jurassic Park, October Sky), and they are close friends with another couple, Watts (21 Grams, The Ring) and Krause (Sports Night, Six Feet Under). Both couples are extremely unhappy in their respective marriages, as well as their in their typical suburban lives. When Ruffalo and Watts begin to have an affair, they and their spouses are forced to confront their infidelity, their choices, and their futures with each other.

Talk about heavy. This film was depressing and oppressive from the very first scene. It was difficult to watch the numerous confrontational dialogues between the couples and to withstand the sense of foreboding that was ever-present. The acting, however, was very good and the couples were very believable. Also, the film captured a horrifyingly real sense of desperation and hopelessness that leaves the viewer chanting, "I will never cheat, it's not worth it. I will never cheat, it's not worth it." But overall, the despair outweighed the intrigue, making the content hard to handle.

It was all a little too much; too depressing, too raw, to dramatic. Perhaps this story is more suited to a novella or to a short play than to the big screen, as it was too hard to take in in such a vivid fashion. Although it was well made film, the material was just too burdensome to enjoy.