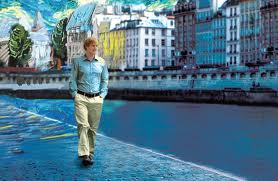 
Woody Allen is the ultimate one-man-band; his films work best when he directs himself. As shown in Annie Hall, Manhattan, and Hollywood Ending, he has the ability to make any scene brilliant, even when working alongside someone like Tea Leoni, one of the worst actresses in movie history. Unfortunately, Owen Wilson does not have that same ability. In Wedding Crashers, it was Vince Vaughn who made the movie funny. In Marley & Me, it was the golden retriever who made the movie touching. In Midnight in Paris, Wilson was left to his own devices, and, subsequently, was in over his head.

In modern day Paris, a wealthy, young couple, Wilson and McAdams (Mean Girls, The Notebook) are planning their upcoming marriage and enjoying the beautiful city. Fed up with his wife's stuffy parents, her pedantic friends, and his own writer's block, Wilson begins nightly forays through the streets of Paris, searching for inspiration for his first novel. What he finds there will both surprise and change him; as a writer, as a fiancee, and as a man.

Out of necessity, any summary of this movie must be both short and empty. Woody Allen has incorporated a surprise within the plot that, I for one, never saw coming. Not that there was an M. Night Shyamalan twist, but a surprise nonetheless. After adjusting to the change, I was finally able to critique what I was seeing, and I found it lacking. Allen lacked a directable star; Wilson just wasn't good enough to carry a fairly heavy emotional load. Wilson lacked a co-star; McAdams is a horrible actress and was never really called upon to do anything but look good and act bitchy. And the film itself lacked any believability; plot twist or no, there needed to be something real to relate to or to grasp onto to, and it just wasn't there.

There were a few positives. The beginning of the film was both beautiful and very funny. The music made the audience feel as if they were actually there in Paris. And Marion Cotillard and Adrien Brody, in a show-stealing cameo, were both quite good. However, the film as a whole felt incomplete. Woody Allen might be too old to star in his own movies anymore, but Owen Wilson was a very poor choice for a role that was obviously written for either Allen himself or a near clone. Casting Wilson and McAdams together had the sour taste of a Hollywood sell-out, and that's not what Woody Allen fans want. After Match Point, Scoop, Vicky Christina Barcelona, and now Midnight in Paris, we just want a good movie. But, hey, at least it was an improvement in one area; Scarlett Johansson wasn't in it.