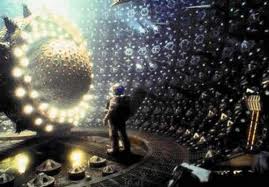 As I've said, I enjoy sci-fi a lot, both books and movies.  I understand that in order to like this genre I have to be willing to accept a few things: 1) the acting might not be phenomenal, 2) the plot may have a few holes, and 3) I could be left wanting more.  A good sci-fi movie will minimize these negative aspects, and a bad one will compound them.  Guess which one Event Horizon did.

The story is quite simple yet interesting: a futuristic spacecraft is capable of faster-than-the-speed-of-light travel using black holes and the folding of space & time.  On its maiden voyage, the ship disappears and is not heard from again, until years later a distress signal is detected, coming from the lost vessel.  A team of doctors, pilots, and rescue workers travels across the solar system in order to save the crew and to uncover the truth, but the reality of the situation is far beyond anything they were trained for, far beyond human understanding.

Yeah, it was how it sounds; a little silly and a little muddled.  The premise was intriguing, and the actors actually pulled off the typical sci-fi setup; lost crew, dangerous mission, secret space tests.  But a good beginning was as far as it would go.  Eventually the plot disintegrated, people starting dying in unbelievable ways, speeches kept getting more and more ridiculous, and I began to lose interest.  Appreciate Event Horizon for being a sci-fi mainstay, but don't hope for much.