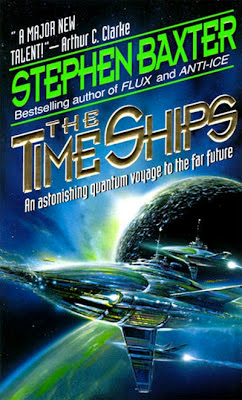 
As mentioned before in my review of The Time Machine, I reread it in order to refresh my memory so that I could read The Time Ships, a sequel written exactly 100 years after H.G. Wells' classic.  I enjoyed the original very much; it was a quick, exciting, and interesting read.  I expected the second in the series to be equally interesting, but I was not prepared for the philosophic depth that Baxter's novel would bring, going far beyond the story that birthed it.

The Time Traveler, as the protagonist is called, is off on another adventure.  After his trip to the far future and his return to London, he sets off again to visit humanity's descendants.  However, the Earth he discovers is unaccountably different, and time, it appears, is more complicated than he could have ever imagined.  With a very strange companion, our hero journeys through space and dimension, attempting to unravel the truth and history of his own invention.

A much longer and more complicated novel, The Time Ships does justice to its predecessor.  It takes the idea of time and twists it, examines it, and ultimately breaks it down in a way that is more philosophical than scientific.  Baxter does an excellent job writing his book in a very similar style to Wells, using the same catch-phrases and tone, just in a different setting.  These novels should be read as one book, as each makes the other better, and together they create one of the best sci-fi stories of all time.