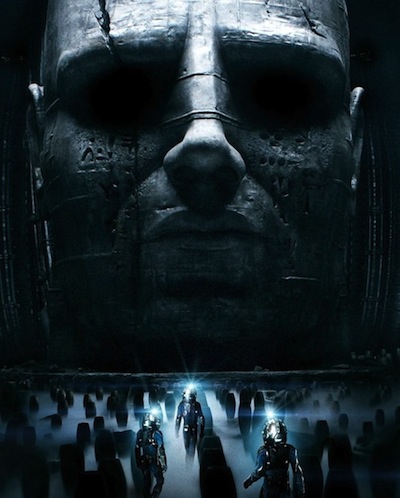 Ridley Scott is a director with one of those pedigrees that speaks for itself: Alien, Blade Runner, Legend, White Squall, Gladiator, Black Hawk Down, Kingdom of Heaven.  When he is involved in a film it will be well made, high-octane, and deeper than an action movie ought to be.  Such is the case with Prometheus, a sci-fi-action-alien thriller with never a dull moment, but with a story that goes beyond a single film into a dark depth that will surprise you.

Credit to Justin Pyle for letting me in on the well-known "secret" of the movie; it is basically a prequel to the Alien trilogy, setting the scene for one of the best sci-fi franchises of all time.  On a mission to discover the origins of humanity, a group of scientists, pilots, and corporate heads travel across space in order to find the Engineers, a race theorized to have created human life on Earth.  Of course, all does not go as planned, and the crew is soon fighting for survival; their own and that of mankind.

If the plot seems manufactured, it can be forgiven.  Prometheus was created to be the quintessential sci-fi roller-coaster, as well as a vehicle for later films.  It is everything you would expect from an action blockbuster, and yet it upheld the standard of its Alien legacy.  The plot was interesting, the special effects were incredible, and the acting was respectable.  The only actor to break mediocrity was Fassbender (Inglourious Basterds, A Dangerous Method), playing David the robot assistant to perfection.  For a film in a series, Prometheus holds its own, and excels as a homage to sci-fi.