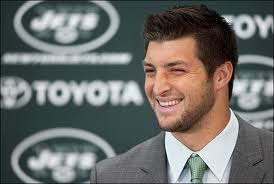 I will admit it; I have a man-crush on Tim Tebow.  Not only is he devastatingly handsome, but he's nice, likable, watchable, interesting, and top-notch boyfriend material.  Anyway, football, right.  On October 9th I stated my view of Tebow with the Jets (Sports - Tebow), so I won't go through it again.  On October 24th I predicted that the Jets would lose at home to the Dolphins (Sports - NFL Picks, Week 8) and that, following a Week 9 bye week, NYJ would turn to Tebow.  They didn't, and my question to the the world is, why not?

In Week 10, the Jets lost 7-28, failing to score an offensive point.  Mark Sanchez went 9 of 22 with an interception, adding to his dismal 2012 stats: 10 TDs, 9 INTs, 8 fumbles, and completing only half of his passes.  The Jets are now 3-6 and have, basically, zero chance of making the playoffs.

Why has Tim Tebow not been named the starter?  Say what you want about him, he has GOT to be a better option right now than Sanchez.  Rex Ryan is on the verge of being fired, the entire team is collapsing, Sanchez could be let go in the offseason; why not made a move that could win you some games, and at the very least will get your team on Sportscenter?

The Jets need to make the switch;  if for no other than reason than 'why not?'
Posted by Olie Coen at 3:00 PM