Before seeing 22 Jump Street, you had better see 21.  Often the sequel isn't exactly reliant on the original, but in this series the second plays heavily off the first.  And it's worth your time to go back, to check out the one that started the franchise, the film that launched itself off the classic TV series.  It's a funny movie; not too much more can be said about it.  It's not wonderful, but it gets plenty of laughs, relying on two pretty hilarious guys and some cool side characters to keep you chuckling throughout.  So watch the first one; I'd recommend it to anyone who likes slapstick, drug use, easy comedy.  But don't expect quite as much out of the second.  Because although it relies heavily on the original and takes almost all its humor from that film, apparently those jokes get old.  Fast.

A little back story.  Schmidt & Jenko are a pair of knucklehead cops who just want to do a good job.  Their first assignment was with Jump Street, an undercover operation working to bust a drug ring in a local high school.  They look young, so the duo was sent back to school to solve the crime.  Now, after a brief stint back on regular duty, the boys have messed up again, earning themselves another trip to Jump Street where this time they'll be heading off to college.  There's another drug situation going on, another group that needs infiltrated, and another facade that needs put up.  Schmidt mingles with the arts crowd, while Jenko gets on the football team, all in an effort to solve the case, prove their worth, and win the day. 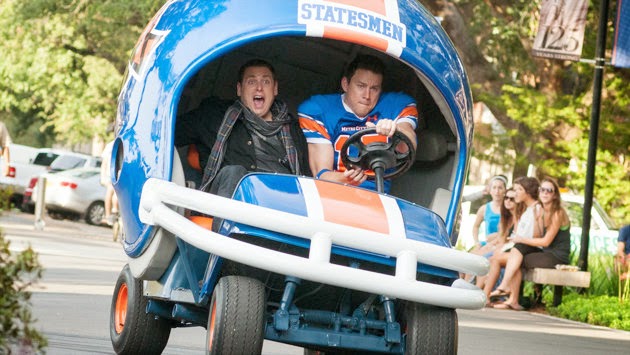 If you've seen 21 you'll be totally prepared for the set up of 22.  It's exactly the same, and I mean exactly.  The mistake, the demotion, the new identities, passing for students, pretending to be brothers, making stupid storyboards, flirting with the pretty girl, making friends, bungling the case, shooting up some rooms.  They don't hide the fact this one will be exactly like that one.  Actually, they come right out and say it, making joke after joke about the audacity of Hollywood, about sequels being ripoffs, about big budgets after a mild success.  It's funny at first, they way the film makes fun of itself, and the humor is right there where the other movie left off.  It's like everyone involved owned the fact that this would be a slightly less hilarious version of the original, that it would steal everything not tied down, that it would ultimately be one big joke on us.

And so that idea was amusing right at first, and I appreciated that at least they knew that I knew.  But man did it get tired.  It just never let up, the fake movie feel, the play on the knowledge that the audience had, the use of recycled comedy.  The trick couldn't stand up for ninety minutes, it was destined to fail, and fail it did.  I laughed quite a bit for the first 1/5 of the film, had a good time.  But then it just got old and forced and done.  Maybe I didn't love the first film enough, maybe I was supposed to be more on board.  Because I liked the original, it was funny, but it wasn't enough to make me want to watch an exact copy that made fun of that fact this it was a copy.  The acting in the film was fine I guess; Hill & Tatum were still a funny pair.  But the side actors didn't do it for me this time.  An over-the-top Ice Cube, a stupid evil character who only made you-guys-are-old jokes, a frat house full of mediocrity; nothing special and nothing to support a storyline that desperately needed some help.  Watch 21 for a few laughs, skip 22 unless you are infatuated with this plot, because all you're going to get is another version badly done. 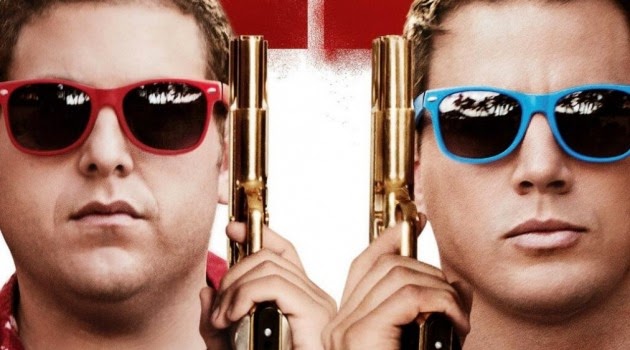