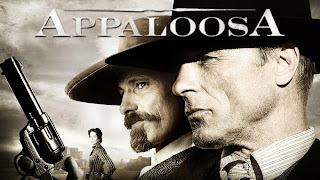 
Westerns aren't for everyone. With their antiquated dialogue, noisy gunfights, and set pieces that appear likely to fall down, they can be difficult to love. Yet Americans, for some reason, continue to give them a chance. Perhaps we see them as a part of our history, a look back into our wild past. Or perhaps we fall for the classic stories, tortured heroes and beautiful damsels. Whatever the reason, Westerns remain a part of American movie culture, despite countless flops. We are rewarded for our perseverance, however, when a film like Appaloosa comes along, renewing our faith in this fickle genre.

Set in a typical Western one-horse town, the story begins with the killing of the town's resident marshal by the town's resident villain, Irons (Stealing Beauty, Lolita). The town hires traveling gunmen Harris (Gone Baby Gone, The Way Back) and Mortensen (Eastern Promises, The Road) to restore order and bring the murderer to justice. Of course, it's not as simple as it sounds, as the mercenaries must contend with an outlaw gang, the terrified townspeople, and a piano-playing siren who might complicate matters beyond all control.

If it sounds like a classic Western plot, it is. The story is typical, the dialogue is archaic, and the sage brush is purple. Yet, it is never boring, never outdated, and always captivating. The film, somehow, seems both perfectly vintage and wonderfully modern at the same time. It is neither too cheesy nor too depressing, but a comfortable blend of old and new. And the acting, by both main and side characters, is superb. Harris and Mortensen play off each other very well, creating a believable partnership. Irons and surprise star Renee Zellweger (Cold Mountain, Cinderella Man) are both solid, switching between likable and despicable with ease. In large part, terrific acting set the tone for a terrific film.

Although Mortensen's monologues at both the beginning and end of the film were somewhat off-putting, the rest flowed smoothly and well. Harris, in his second attempt at directing himself, created a clean, smart, and surprising touching story. Appaloosa is a cut above the standard Western menu, reassuring movie-goers that they can still have faith in this essential American tradition.