Movie Review - The Way Back 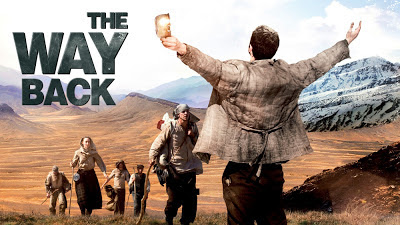 
Peter Weir is one of the best directors you've never heard of. His films include Witness, Dead Poet's Society, The Truman Show, and Master and Commander, yet his name is fairly unrecognized. The reason may simply be that he is doing his job. Weir is a master of environment, transporting his audiences away from the theatre and into a place where we forget ourselves, forget that we're watching a movie. He allows us to become barn-raisers, prep students, actors, and sailors, not just to watch them on screen. Weir works his magic yet again in The Way Back, and this might be our toughest role yet.

Based on a supposed autobiography entitled 'The Long Walk', this epic film tells the story of a group of Polish prisoners who escape from a Siberian gulag during WWII and must travel 4,000 miles on foot in order to reach freedom. Jim Sturgess (Across the Universe, 21) leads this group in hopeless exodus, accompanied by an American engineer, Harris (Enemy at the Gates, Appaloosa), and a Russian criminal, Ferrell (Alexander, The New World). As the fugitives travel across Asia, they must survive extreme conditions, starvation and capture in order to realize their dreams of freedom.

As expected, I was immersed in the environment of this film. I felt the journey every step of the way; I was a fugitive right alongside my comrades. It may sound cheesy, but I really did lose myself in this adventure. However, stepping back, there were a few imperfections. The dialogue could have been smarter. The accents could have been crisper. The female character should have been completely cut and the ending should have been completely different. But while these issues may have kept it from being a phenomenal film, they did not keep me from thoroughly enjoying the two hours that I spent watching it and being completely transported away from my world.

There are a lot of questions surrounding the authenticity of this journey and it's historical accuracy. Weir has even said that he considers The Way Back to be a fictional film. Yet, I don't see that it matters. Either way he delivered, directing a film that was both beautiful and captivating, and I, for one, will be glad to forget him once again.