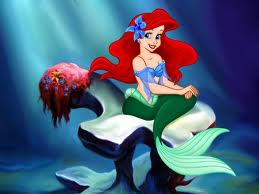 
Reviewing an animated movie is difficult. There is no pure acting, only voice-overs, the script, in this case, is half musical number, and most of the jokes are aimed at 7-year-olds. Add in the fact that The Little Mermaid was one of my childhood favorites, and a favorite of millions of American kids in the 80s, and you've got one tricky situation. However, it's much easier if the movie is either obviously wonderful or painfully bad. And so, as I sat down to watch this blast from the past, I hoped that it would at least be one or the other.

Based on the much more gruesome fairy tale by Hans Christian Andersen, this nautical romp follows Ariel, a young mermaid who longs for something more than her pampered undersea life. Fascinated by humans, but forbidden by her domineering father to go near them, she studies them in secret, and, by chance, meets a young human prince. When the evil sea witch Ursula promises to aid Ariel in meeting the prince again, she accepts the dangerous deal, no matter what the cost. With the help of her fishy friends, Ariel begins a journey to discover the human world, and, ultimately, to discover herself.

Thankfully, and despite a mildly silly storyline, The Little Mermaid is delightfully magnificent. The characters are believable, deep, and well-formed, making Ariel's quest for love one we can all relate to. The humor might be a touch more juvenile than the modern animated features from Pixar, but that didn't stop me from laughing at the prat falls and silly sight gags that are still funny after all these years. What shifts the film from good to great, however, is the music. Classic songs like 'Kiss the Girl', 'Under the Sea', and, of course, 'Part of Your World' are both touching and fun, creating a movie experience that cannot be paralleled.

It takes a great film to withstand the transition between childhood and adulthood, but Disney seems to have mastered the art, showing again and again that their films are truly timeless. The Little Mermaid is definitely one of these; a wonderful story that never gets old, and yet somehow has a depth to it that is only revealed through time.