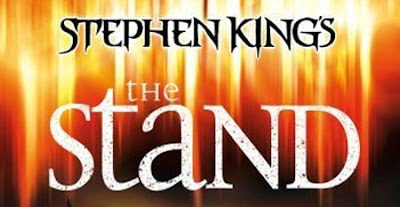 
Stephen King is my favorite author. I have a large collection of his books, I've read almost everything he has written, I pore over the details of his stories looking for 'Dark Tower' connections, and I think that he is, in general, awesome. Films based on his works, however, cannot always be described as such. Some are quite excellent: The Shawshank Redemption, Stand By Me, Green Mile. But some are downright awful: Hearts in Atlantis, Thinner, The Dark Half. It doesn't seem to matter how good the book is, the movie version takes on a life of its own. For this reason, I was nervous to watch The Stand, one of the greatest King books of all-time.

This TV miniseries, based very closely on the epic novel, was originally aired in four 90 minute episodes: The Plague, The Dreams, The Betrayal, and The Stand. Taking place throughout the United States, the story is broad, yet simple; a government developed 'Super Flu' is unleashed on the population, leading to the near annihilation of the human race. The few survivors must come together if they hope to survive, but a choice is given to them: join an ancient grandmother in Nebraska or a dark man in the west. Their decisions will set the scene for an epic battle between good and evil, one that will decide the future of mankind.

Six hours in a long time to devote to any film, but, thankfully, The Stand was worth it. The plot stuck to the novel as much as was possible, which, given the success of the book, was very wise. The story flowed, it was interesting, and it never felt as long as it was. The special effects might have been very TV and, therefore bad, but they didn't detract too much. The acting, as a whole, was surprisingly good, with a few interesting cameos from Ed Harris, Kathy Bates, and even Stephen King himself. Molly Ringwald (Breakfast Club, Sixteen Candles) might have been utterly horrible, but even she couldn't mess up the chemistry that the rest of the cast had. All in all, for a made-for-TV miniseries, it was a well-made film.

That's not to say there weren't problems. The side characters were poorly acted, the dialogue got a little preachy towards the end, and most of the adult themes were removed to pacify TV audiences. But the story could not be denied, nor could King's natural talent for forcing you to enter his world and beg to stay. 'The Stand' is a phenomenal novel, but also a strong film, one worth the time.