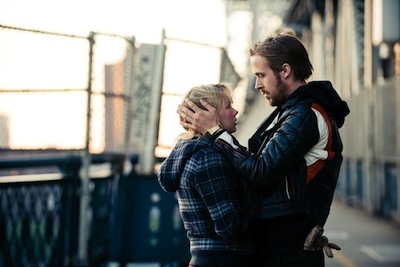 Computer animation technology in movies is becoming too good, making characters look too real. A recent study showed that there is a point at which an animation becomes so lifelike that it makes the audience uncomfortable. The same could be said about dramas as well; Blue Valentine is a film that is almost too realistic, so familiar that it's painful. And yet, this is not make-believe, this is real life, and the line between comfort and realism has just been crossed.

The story is no more and no less than the classic boy-meets-girl. Shown throughout different stages of their relationship, Gosling (The Notebook, Half Nelson) and Williams (Brokeback Mountain, Shutter Island) follow the usual path: meet, fall in love, start a family. But, of course, it's not as simple as it sounds. Their pasts, their problems, and their insecurities shape their lives together, as they attempt to hold on to the pieces of what they had once created.

Married, single, young, or old, everyone can relate to some part of the characters in this film. They are so real that it's frightening, forcing us to see ourselves for what we really are, the good and the bad. The story may be simple, but it is true, undecorated, and all too common. Gosling and Williams do an amazing job, draining themselves and giving us raw performances that transforms us into voyeurs, seeing something we should not be seeing. This film was a look into the lives of two people that we can all relate to in some way, which is why it is so wonderful and so disturbing at the same time.

Although a special film, it is definitely not for everyone. It is a pure character piece; two actors having conversations with each other without much else to rely on. Also, the themes are incredibly adult: sex, death, marriage, hope, and not much time for a breath. But if you can stand to face a few fears, see things that make you wince, and allow some walls to be torn down, then Blue Valentine can be an unparalleled work of art that is, truly, too real to deny.