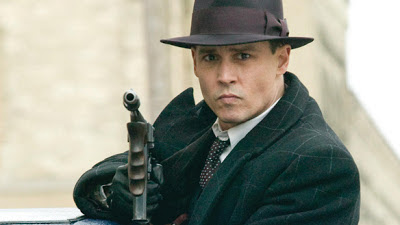 
In a classic Friends episode, Rachel attempts to make a traditional English trifle for dessert. It starts out great, with jam, custard, and ladyfingers, but an accident leads her to add beef, peas, and onions as well. While the gang tries to hide the fact that it's inedible in order to protect her feelings, Joey proclaims that he loves it; "What's not to like? Peas? Good. Beef? Good. Jam? Good." I use this to illustrate a point: contrary to what Joey's stomach says, great ingredients do not always combine to make a great dish.

Michael Mann (The Last of the Mohicans, Heat) directs this action-packed gangster film based on the career of notorious criminal John Dillinger. Played by Johnny Depp (Blow, Secret Window), this larger-than-life outlaw leads bank robberies, organizes jail-breaks, and stays one step ahead of the law, all while falling in love with the beautiful Marion Cotillard (Inception, Midnight in Paris). Meanwhile, g-men Christian Bale (Batman Begins, The Prestige) and Billy Crudup (Almost Famous, Big Fish) attempt to capture Depp, naming him America's #1 public enemy.

This jagged summary is sadly identical to the film itself; full of credentials, but lacking in substance. Yes, the star power was quite impressive, but it was also very overwhelming. The pieces did not fit together to make a cohesive picture, and the actors themselves seemed to be phoning in their lines. Although, in their defense, they were some of the worst lines I have ever heard spoken on screen. Every bit of dialogue was forced, clipped, uncomfortable, and just plain awful. It was obvious that the script was the last part of the film that was worked on. However, the film as a whole was so bad that if the script was the last, I have no idea what was the first.

Beyond the casting, there were not many positive aspects to this film. The action was intense, yet unrealistic. The set was beautiful and the time was well represented, but the actors didn't seem as if they fit there. There was a strong Mann sense at the end of the film, but by then it was too late. The ingredients were all good, but the finished product was not, leaving Public Enemy a film best not tasted.