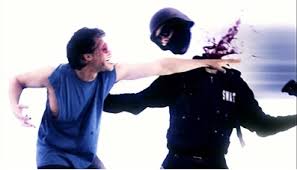 
As far as I knew, bath salts were something I bought for my mom for Christmas.  They smell nice, they look like rock candy, and they are a cheap & easy present.  I heard about "bath salts" about a month ago from a friend who works on a college campus.  Apparently this new drug is making the rounds and is causing quite a stir.  It is a substituted cathinone, with effects similar to amphetamine or cocaine.  The interesting thing about "bath salts" is that they are small white crystals, look like epsom salts, and are often packaged and labeled "not for human consumption", which inhibits their legal prosecution.  Anyway, as Joe Friday would say, those are "just the facts".  Bath Salt Zombies is less about science and more about drugs making people want to eat other people. 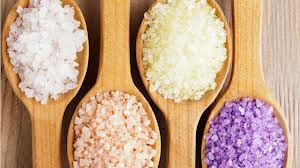 The story begins with two plot points that set the scene: 1) after a "salts" crackdown in the south the movement has traveled north and has found a new home in New York City, and 2) a government strain of top secret super drug has been compromised and has found its way to the streets.  The top dealer in the Salts Market is a group called the Dragons.  Highly organized and professional, they have created a monopoly on the drug and stand to make a huge profit.  However, independent dealer Bubbles hopes to get in on the action, as he and his partner have created a brand new strain of "salts" that is both highly profitable and highly addictive.

In the background is Agent Forster, a DEA officer who has made it his personal goal to stop the flow of "salts" into the city and to take down the Dragons, with or without a SWAT team.  As he pits himself against this elite crime syndicate, a surprise emerges; Bubbles and his partner have unknowingly created a mutated version of this hip drug that has killer side effects.  Ritchie, a local junkie, becomes an unwitting participant in this deadly game, and must learn to control his new urge before he becomes something that no one ever saw coming; a Bath Salt Zombie! 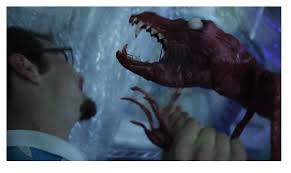 First of all, lets lay it all out there.  This is a movie about drugs that turn people into zombies that desire human flesh.  It has numerous bloody decapitation scenes, faces are frequently torn off, two different women get naked and then get violently murdered, and various body parts are constantly being ripped off, eaten, and/or flung about.  It is not a film for the faint of heart, it is not for children, and it is in very poor taste.  That said, it's a B-movie, what did you expect?  You either are or are not a fan of independent horror films that rely heavily on the gross-out factor in order to be even remotely successful.  Bath Salt Zombies is not World War Z or 28 Days Later.  It's more The Toxic Avenger or Halloween Night.  You've got to know what you're getting into if you want to have any chance of enjoying this very strange movie.

Now that we understand what we're dealing with, let's pick it apart.  The acting, for instance; it was not as awful as it could have been, but it wasn't Oscar-worthy either.  Salkil was appropriately disturbing and whacked-out as a mile high zombie flesh-eater.  Eal played the part of a karate-chopping cop well enough to be entertaining.  And the amateur drug dealers stole the show as two nerdy wannabees in over their heads.  The set and effects were passable, but obviously low budget; fake blood sprays, silly mutant drug addicts, and what I can only guess were rooms in the director's actual house.  But, again, it's hard to judge the film too harshly because it never aspired to be Brokeback Mountain.  It was what it was, and what else can you expect when you probably asked your friends to be in your movie and you probably all got stoned right before shooting.

All that said, it wasn't horrible.  I'm not saying it was great, but I watched the whole thing, I laughed a little, and I moderately enjoyed myself.  But then again, I like zombie movies, I like campy horror flicks, and I don't mind a little gratuitous sex & violence.  This actually wasn't Mills' first project, and you could tell; it was as professional as a trippy slasher movie can be.  It was well made for it's budget and was fun while it lasted.  I mean, it was short, which was probably a great idea, because I'm not sure how much more face-eating I could have watched, but it was good enough to not turn off.  And I actually liked the fact that they referenced "salts" correctly, up to a certain point.  It added a small amount of relevancy to what otherwise was a ridiculous plot.  I'm not saying that the majority of people will fall in love with Bath Salt Zombies, but it wasn't as awful as it appears at first glance. 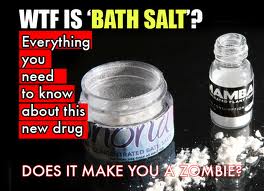 Video - Shot in 16:9 HD, the picture wasn't a distraction, but it wasn't amazing either.  Like I said, it was decidedly low budget, but did fairly well within those restrictions.  There's no need to watch this on Hi-Def equipment; you won't see anything special.

Audio - There are zero sound options with this DVD.  No language selection, no stereo choices, and no subtitles.  And the mixing during the film was quite bad; the voices were turned too far down and the music was turned way too far up.  That said, there was an interesting soundtrack of punk/rock songs, if you're a fan.

Extras - Again, almost no options here.  You do get an extremely odd cartoon at the beginning of the movie featuring a slacker kid who makes a deal with the devil and then attempts to eat his own mother.  So there's that.  Otherwise, your extras are a trailer for the film and a commentary version with Mills and Salkil, where they explain their reasoning behind various parts of the film.

Rent It.  Bath Salt Zombies is like a B-movie from hell, but one that somehow comes across as funny and watchable, if barely.  Don't expect too much and you won't be disappointed, but check it out if you're a fan of zombies/slashers/horror.  The video is fine but not wonderful, the audio is poor, and the extras are almost nonexistent, so don't spend top dollar on this DVD, as it's nothing to write home about.  Just watch, enjoy, try to accept it, and you might have a good time.