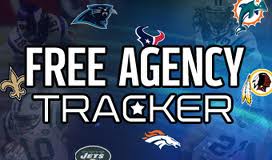 Tuesday March 12th @ 4pm marks the beginning of the 2013 NFL season and the start of the free agency period.  For me & Adam Schefter, it's an exciting time.  Teams are scrambling to sign top choices, players are flying from city to city, and the year's outlook begins to take shape.  A week from today I'll post the biggest signings and visits of Free Agency thus far.  Today let's take a look at the market and where a few of the best players might end up.

OL - There are some top tier lineman available: Vollmer (NE), Levitre (Buf), Smith (Cin), Long (Mia), Loadholt (Min), and they should all cash in this offseason.

WR - There are a lot of good receivers available, even after the top guys; Welker (NE), Amendola (STL), Hartline (Mia).

RB - If you want a veteran back who still has some fuel in the tank you've got some guys to choose from: Bush (Mia), Turner (Atl), Jackson (STL), Mendenhall (Pit), Green (NYJ).

All in all, a good crop of free agents.  It should make for an exciting kick off to the season.
Posted by Olie Coen at 11:56 AM