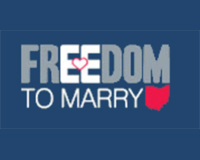 I try not to be political on my blog.  I write here because I like to talk about sports and movies, and I hope to some day be an actual film critic.  I do post my thoughts on some issues, but they're not usually too controversial.  But today I feel like I need to speak my mind, and what better place to do it.  I promise tomorrow to return to sports and Thursday will most likely see a DVD Review.  If you disagree with this post please feel free to comment, but I reserve the right to moderate.

Today the Supreme Court begins hearing arguments concerning the definition of marriage, especially as it applies to homosexual couples.  Now, my long standing belief (I can remember writing on LiveJournal in high school about it) is that it is ridiculous for the government to be involved in marriage.  Anyone who has ever gone down to their local courthouse and told some lady that they were not first cousins with their fiancee knows how silly a marriage certificate is.  And then there's the ceremony, which does absolutely nothing other than make you feel married and/or give you a hangover.  So while I understand why the government steps in for insurance and tax reasons, it has always seemed odd to me that what is basically just a commitment ceremony should be so highly regulated and argued over.

That said, the marriage ceremony and certificate have become symbols of marriage in our culture; without them Americans can't really feel married in the eyes of others, regardless of how long they have been with their partner.  So it is important to people to get officially married, even if many marriages end in divorce and even if they are not religious.  I know that for me it was a declaration of my intent to stay with one person for the rest of my life, and a way to show my friends and family that I was starting a new chapter in my life.  My wedding was the very beginning of my adult life and it symbolized my choices.

Homosexual couples want the same thing that I wanted; a recognized symbol.  Yes, it's silly that you have to get a specialized license, like you're a street vendor or a truck driver.  And yes, it's silly to non-Christians that you have to say some meaningless phrases from the Bible in order to get anyone to actually perform the ceremony.  But, ridiculous as it is, it matters, and what homosexual couples want is the ability to go through the same pointless rituals that heterosexual couples can do so easily.

Now, I don't want to get into the same overused arguments that everyone has heard ad nauseam.  I know that opponents say that it's a slippery slope and that it will lead to people marrying their dogs, that it's a religious ceremony and therefor can't include gays, or that the definition of marriage is between a man and a woman.  And proponents will say that marriage isn't hurting anyone, that it doesn't have to be a religious issue, or that the "sanctity of marriage" is a nullified term.

But, for me, the key idea here is that of equality.  Are people equal or not?  If we believe in this country that all humans are created equal then we can't make any exceptions; equality is an absolute.  We must, by definition, treat each other as equals, regardless of race, wealth, religion, intelligence, sex, or sexuality.  All humans must be given the same respect and rights until they have broken the social contract, which homosexuality does not do.  And if we don't believe in equality than we need to stop pretending that we do and change some wording in the Declaration of Independence.

The question is not whether homosexual couples are entitled to the same marriage rights as heterosexual couples.  The real question is, assuming we are all humans of equal standing, does anyone have the right to stop them.  I believe that marriage should be an option regardless of sexuality and that it is unethical to prohibit it.  We are all created equal as members of the same species and we have the same rights as humans.  We cannot choose to hold some rights back from a select few except in cases of the breaking of the social contract or the harming of others.  Homosexuality does neither of these things, and therefore does not change the equal standing with all other members of society.  Marriage equality matters, as it is both ethically important and ethically necessary.  I hope that the Supreme Court feels the same way as I do.
Posted by Olie Coen at 11:58 AM