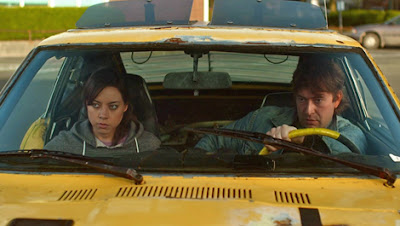 
Mark Duplass is living the dream.  He and his brother Jay started out as independent filmmakers (Puffy Chair, Baghead).  And while most indie visionaries fizzle out, Duplass kept going.  He began acting in more major roles (Humpday, Greenberg) and starting creating more major films (Jeff, Who Lives at Home, Cyrus).  And while you could accuse him of selling out to Hollywood, you can't accuse him of abandoning the offbeat humor and skewed viewpoint that made him interesting in the first place.  Safety Not Guaranteed is a perfect example of just that; it's a quirky original film, but it's sold it's soul to the devil, leaving it halfway between indie flick and box office bomb.

The story centers around Darius, a young women who has become completely lost in her own life since the death of her mother.  She is currently an intern at a local magazine, and when a wacky story falls into her lap she leaps at the chance to cover it.  In the form of a help wanted ad, a man named Kenneth has asked for a partner to go back in time with, bring your own weapons, safety not guaranteed.  As Darius and Kenneth become friends, they must decide if they can trust each other, how much of each of their back stories is true, and what will happen if the time machine turns out to be more than a hoax.

If nothing else, this movie deserves credit for originality.  It's a cooky premise, but the characters really sell it and keep you guessing the whole way through.  There is some great humor, a few really touching moments, and in general some good acting that supports a good movie.  And that's where it stops.  I can't point my finger at any one great thing.  Duplass was likable, Plaza was passable, and Johnson may have stolen the show as an asshole journalist, but nothing wonderful stands out.  And by the end the actors were in over their heads and the plot was fizzling out quickly.  Safety Not Guaranteed was a good movie, and an entertaining one.  But it fell just short of great.