Movie Review - Of Mice and Men 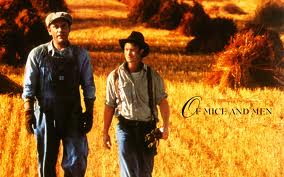 So many movies are an adaptation of a book, and they meet with varying degrees of success.  Some, like Fight Club, are exponentially better than the novel.  Some, like I, Robot, are incredibly worse.  Some, like There Will Be Blood, are so different that they're hardly recognizable.  And some are doomed from the start, because the book that they are based on is almost too perfect to be touched.  Such is the case with Of Mice and Men, a film version of a timeless classic that could not possibly live up to the expectations of its name.

Based on the short novel by John Steinbeck written in 1937, and set in California during the Great Depression, it is the story of two men who, though very different, have a bond that has held them together across the country and through many troubles.  George is a smart, tough dreamer who works as a ranch hand in order to someday have a place of his own.  Lenny is his companion; feeble-minded but "strong as a bull".  Lenny's simple thoughts and basic desires often get him and George into sticky spots, but in a lonely world they know that they only have each other.

Of Mice and Men the film is not as good as the book; that's a given.  It doesn't offer you much beyond bringing the story to life.  That said, it is a story that deserved to be heard, whether in story or movie form.  The amount of simple metaphors that are up for discussion in this story are phenomenal; you could spend all day arguing the deeper meanings of each piece and each character.  Sadly, not many of the characters are fleshed out in the film, including George; Sinise just doesn't have enough talent to carry the role to the end when things become more complicated.  Malkovich, on the other hand, is fabulous, playing Lenny to a tee.  A hidden gem is Walston as the old hand Candy, with his ancient mangy dog.  There are these few bright spots, and the story carries the movie no matter what, but the film isn't excellent.  You want brilliance, read the book.