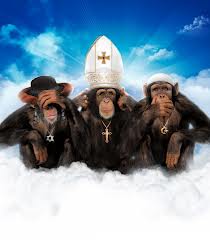 If you're a fan of Friends, you know that Joey is not the brightest Crayon in the box.  And yet he may have spoken one of the most profound lines in television history; "There is no such thing as a selfless good deed."  I, for one, believe this to be true.  I don't claim it as a bad thing, just a fact; doing a "good deed" makes YOU feel good as well, and therefor it cannot be entirely selfless.  This idea can be applied to documentaries as well; there is no such thing as a selfless documentary.  The director is biased, the interviewer is biased, the editor is biased, and that can't be helped.  With that said, I was surprised that Religulous was the most one-sided documentary I have seen since Bowling for Columbine, and that's saying something.

Bill Maher makes it a point early and often to let you know that this is an anti-religious film.  It is a "documentary" in which he travels around the world confronting various religious figures, believers, and critics in an attempt to convince us that faith in the invisible is false, destructive, and just plain dumb.  Being raised Catholic by a Jewish mother, Maher has been well educated in the dogma and practice of multiple religions, and no organization is immune to his scrutiny; he argues with Christians, Jews, Muslims, Mormons, Ex-Gays, Ex-Jews, Ex-Mormons, Ex-Satanists, you name it.  He attempts to bring humor to a serious topic, but the point of his film is clear; we should all be doubting what we do not know, not believing in what we cannot prove.

At first I was surprised by just how skewed this film was.  After all, shouldn't a documentary pose arguments and promote discussion?  But when I tried to picture an unbiased documentary it wouldn't appear, because it doesn't exist.  Even a film about starving indigenous peoples isn't selfless and non-partisan, it's just that the majority agrees that their situation is sad and we don't care that the filmmaker didn't shed light on the tyrannical Emperor's side of the story.  My point is this; yes, Religulous was one-sided, but that doesn't actually stop it from being a documentary, it just makes it a little harder to swallow.

Now, if you're a born-again Christian you are really going to hate this film.  Most likely if you're a believer in any religion at all you are not going to be very happy with it.  If you're an agnostic, an atheist, an animist, or just a Bill Maher aficionado you'll probably get a good kick out of it.  But I'm not sure who you have to be to actually love this movie.  It was interesting and comical, but it wasn't ground-breaking, and it definitely wasn't open-minded.  Take Religulous with a grain of salt if you feel like taking it at all, but don't expect a miracle.