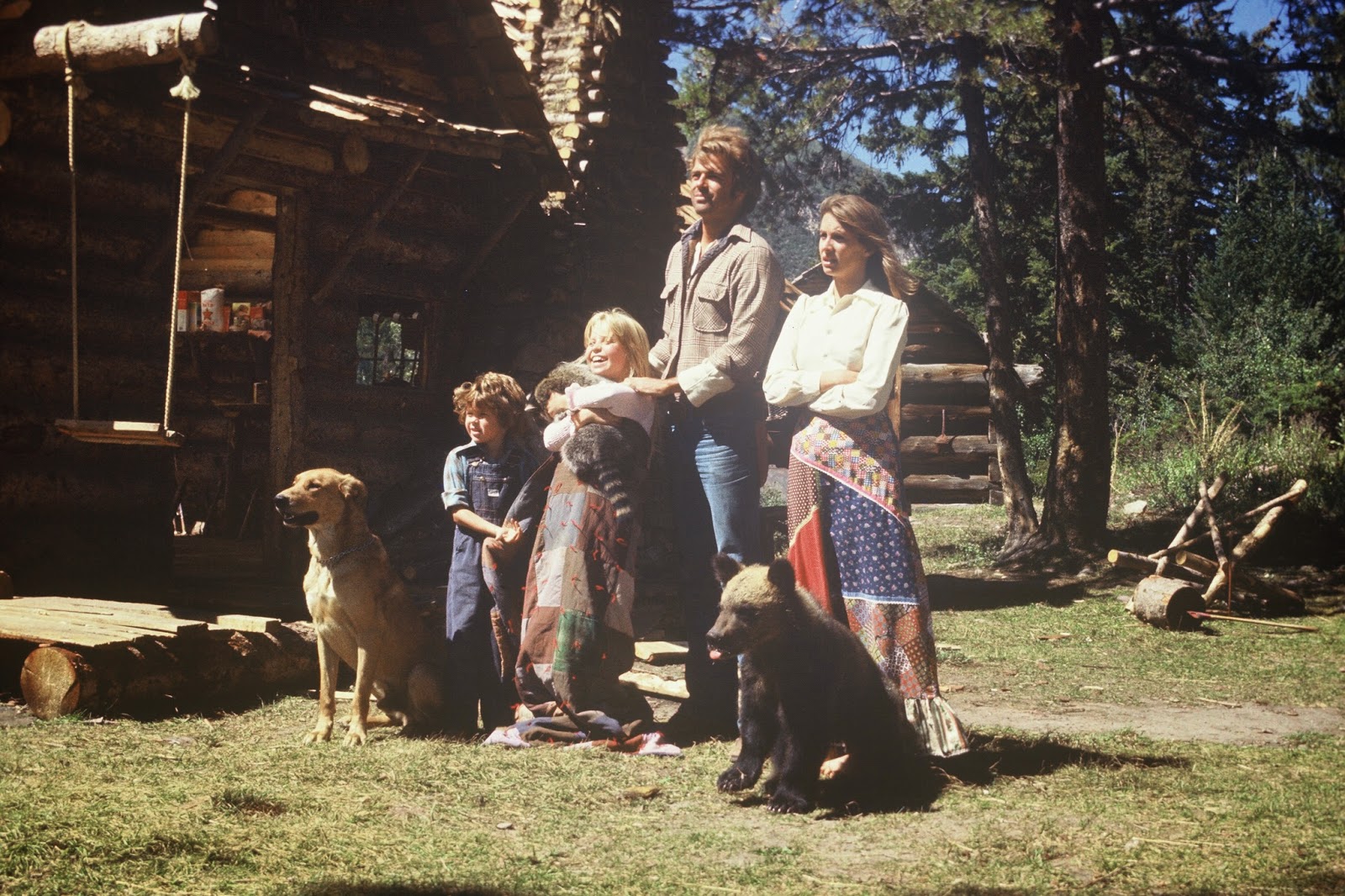 
I can credit my mom & dad for my becoming a film critic.  At a young age, I was exposed to movies of many different genres, of a variety of styles and themes.  We were a close-knit family and Friday nights were movie nights up until high school really, when our lives became more individualized.  But movies were always something we shared, either a new VHS checked out from the local store or a film off the shelves at home, rewatched for the hundredth time.  The Wilderness Family was one of the latter, a movie that was worn out from too many viewings, a know-the-lines-by-heart story that became part of the fabric of our lives, transforming into something more than just entertainment.  So when the chance came to review not one but three films from this series, I jumped at the opportunity to revisit the past.  I figured nostalgia would carry me through, and it did for the original at least, but the second & third couldn't be saved and (sorry Robinsons) shouldn't be watched. The Wilderness Family - The first in what would become a trilogy, The Wilderness Family tells the story of the Robinson family and the adventure that changes their lives.  Living in L.A. is taking its toll on this young family.  Skip & Pat used to dream hippie dreams of independence and nature, but gave those up to start their responsible lives.  Their daughter Jenny is sick, with an allergy or an illness that's brought about by the filth of the town in which they live.  Little Toby just wants to have fun with his constant companion Crust, the family dog.  And so, when the stress of city living becomes too much, the Robinsons sell all they own, buy a piece of land in the Rockies, and move their lives to a place far away from everything.  They better learn fast how to survive, how to live off meager supplies, how to build their own home, connect with the nature around them, survive the elements, and become the family they always dreamed they could be.

Further Adventures - In the second installment, winter has come.  The Robinsons have settled into their new existence, with their cabin & their animals, and are ready to officially call their experiment a success.  But are they ready for what the wild land has in store for the toughest season of all?  The local old folks predict a frigid winter, with conditions that will test even the most hearty of mountain men.  A trip to town to buy supplies, a budding friendship with Boomer the prospector, bedding the family bear down in a cave for the winter; preparations are all made.  But nothing can prepare the family for all possibilities.  Pat gets sick, a pack of wolves haunt the cabin, a wolverine destroys saved up meat; this season proves the toughest of all very early on, hitting the Robinsons hard.  Can they survive months in the cold with only each other to turn to, or will they be forced to give up and return to the lives they left behind?

Mountain Family Robinson - And lastly, the most dramatic of the Wilderness Family trilogy, a story of not just man vs nature but man vs the establishment.  Having made it through the winter, the Robinsons now turn their sights on permanent living, building a garden to give them all the food they might need.  Pat is especially proud of the family garden, and when nature challenges its construction, she seriously considers leaving the woods forever.  Well, everyone might have to anyway, because a government official who drops by declares that the family is living their illegally, not mining the land as was agreed upon in the original claim.  Boomer to the rescue, as the old gold digger thinks he can find a lucrative mine, stake a claim alongside the Robinsons, and help them stay forever.  It won't be easy, as the land & the local animals seem determined to make this latest adventure a true challenge.  But don't count the family out yet, as they've persevered before and can definitely do it again. 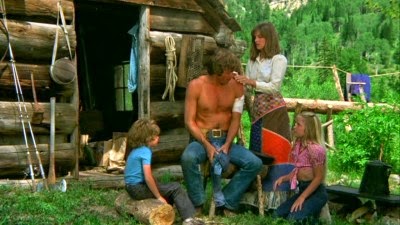 Let's take a look at each film in turn.  The first one is by far the best, and I think I can say that even with a little bit of bias.  After all, my family had all three movies at home, though the original was the one I watched and enjoyed the most.  It's still the strongest of the trilogy, which makes sense, knowing that its strength & reception led to the making of the other two.  It's a movie that epitomizes the 70s, a time of longing for a more natural way, an experimentational time in America, especially for those in the cities who wanted something vastly different.  The movie shows all that to us fairly simply; the wooly man, the hot hippie mom, the happiness in nature, the slo-mo romps through the tall grass, the flowing dresses, the curly hair, the friendly animals.  It's like a 70s paradise in the woods, a heaven that every so often throws angry cougars your way.  The film has catchy original music, though it & many scenes become repetitive really quickly.  It's fun, easy to watch, family-oriented, and a definite indication of the feeling of the times.

The second film takes a step back.  First off, they get a new Jenny.  I'm not complaining, the first Jenny sucked.  She was always running around screaming her fool head off and getting into trouble.  She was the reason they ever had trouble in the first place and quite often I wished she'd just get eaten.  Anyway, the new actress they got for Jenny was more reserved and seemed much older, even though not much time is supposed to have passed.  What wasn't different was everything else; the music was the same, the flowery montages were the same, and there was even some use of stock footage from the first film.  Not very original.  Ironically, the cabin was different, which was perhaps supposed to go unnoticed, but at least they added in a new element and that was Boomer.  He became a real character, instead of just some weird guy who appeared every once in a while.  He started connecting with the family and that actually added to the story.  Still, I spent most of my time apathetically wondering if they'd all just die this time; not what the filmmakers were going for I presume.

And lastly, the final chapter.  Again, everything was pretty much the same; the frolics with nature, surviving the elements, Pat crying & wondering if they should leave.  The big difference was the music, which was distinctively horrible, and the pace, which was much slower.  This third installment was much more boring than the other two, coming across as a dull repeat of what we'd already seen two times before.  I still liked Boomer and thought that he added a lot to the family dynamic, but the whole government official thing was pretty stupid.  As a whole, the film felt like an afterthought, a last attempt to make money before the 70s were over and people stopped wanting to live in the mountains.  Perhaps I was just tired of watching the same family do the same things, but I think it was also a hefty amount of bad direction, bad acting, and recycled story.  Check out the first in the trilogy for a little woodsy time capsule drama, but forget the next two. 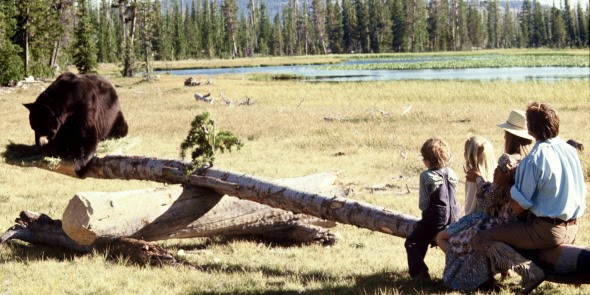 Video - With an aspect ratio of 1.78:1 (16x9 Widescreen), the video is about as good as you would expect.  They did their job transferring the footage to DVD, making new titles appear over the old, calling the movies 1, 2, & 3 now.  But there's only so much you can do with film from the 70s.  It's not a very clear picture, though the nature scenes still come across as beautiful more often than not.  Just don't expect a lot of clarify from the disc and you won't be disappointed.

Audio - There are no audio options on the DVD, nor any other options for that matter, not even languages or scene selections.  What you get from the menu is a choice between which of the three movies you'd like to watch, that's it.  The film was taken from mono and turned into Dolby Digital English 5.1, so the sound is fine, especially remembering how it was on the original VHS. 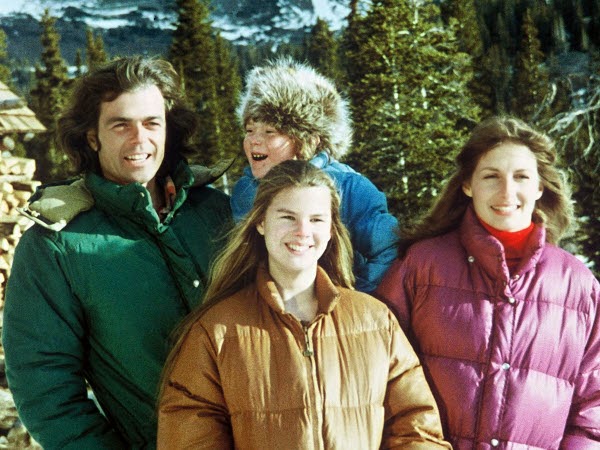 Rent It.  With only the first film being strong enough to watch, and even that perhaps not good enough if you didn't love it thirty years ago, I wouldn't recommend the whole package for more than a nostalgic rental.  The first movie in the trilogy has some heart, the second bravely attempts to continue the story, while the third falls flat on its face.  The video is dated, the audio is well updated, and there are no extras to be had.  Maybe check out the first one if you have some memory of it, but steer clear of the others; they're not worth your time.