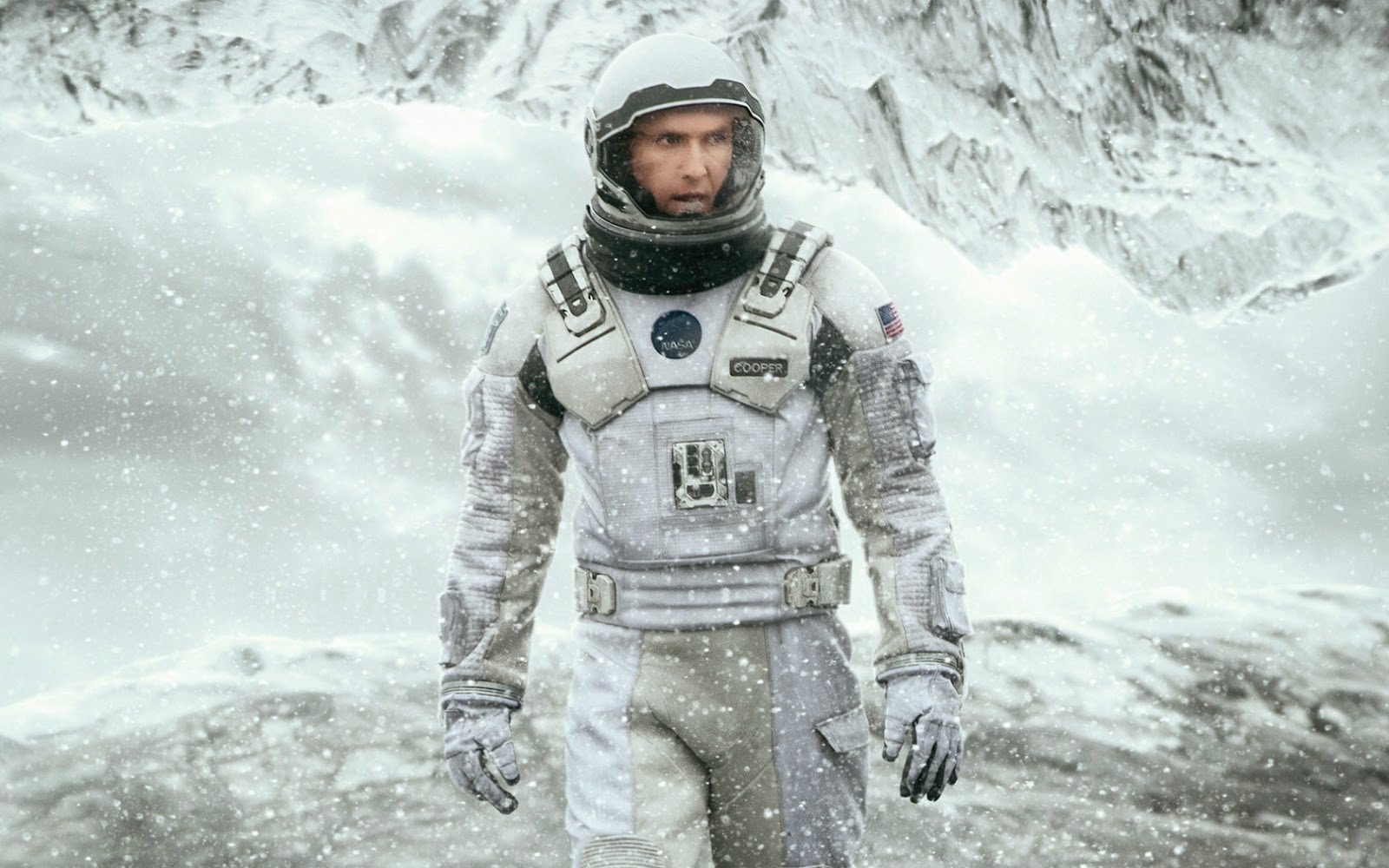 
To say that a film is not as good as 2001: A Space Odyssey is ludicrous.  To film critics, movie buffs, and sci-fi geeks, what is?  That film was a groundbreaking piece of art, a late 60s masterpiece that hasn't lost a bit of potency in almost 50 years.  And I don't even love the movie, wouldn't put it in my Top 20, but I respect it as the sci-fi epic that set the standard, that showed others where to go, and that remains the pinnacle of the genre.  So, to leap to the conclusion that Interstellar doesn't match 2001 in the realm of space cinema is just too easy and too vague.  Of course the two will be compared, both feature a lot of the same elements, but only one will win the battle of who's-better-than-who, and we all know which one that is.  My point, for lack of a better word, is that Nolan's film needs to be held up against others in the modern age, sci-fi flicks of the last decade and even of the last two years.  When we stop trying to find holes in what is being called the most ambitious movie of the century, when we stop shooting it down because it's not superior to the god of the industry, and when we judge it based on our own critique of others like it, there is no reason why Interstellar shouldn't stand alone as the best picture of the year.

In a future in which the planet is sending us a clear message that our time here is done, humanity scratches out a living in the dust of the world it once knew.  Human population has dramatically decreased, global technologies have ceased to exist, and the most important thing a person can do is become a farmer, battle the blight, survive the dust, feed a dying world.  For Cooper and his family, this life isn't delivering the stimulation that they need.  Cooper was one of the last of the pilots before food shortage made space exploration and military might obsolete.  Murph, his daughter, is as bright & talented as Coop, but is forced to grow up on planet that's slowly killing off her people.  But their futures are about to change, after a gravitational anomaly leads them to a secret government base and the discovery that not all flight has been grounded.  An underground team has predicted that humanity will indeed die, that the Earth is no longer our home, and that we must leave if there is to be any hope of future generations.  Cooper will lead a mission into the depths of the galaxy, in search of life and a new beginning, promising his family that he will return someday, no matter the cost. 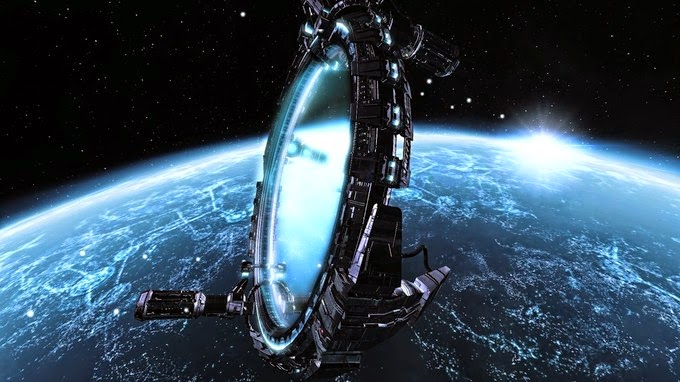 Let me start by addressing the negative criticism of the film.  Critics are claiming that Interstellar isn't as good as 2001, that it isn't the best movie they've ever seen, that it's not the greatest film of the year.  And while part of this defensiveness is based on the overreactions of those who loved it, saying that a film isn't the #1 movie of all time is showing everyone that you at least considered it.  This picture is at least great, at least provocative, and at the very least worthwhile.  It's been called ambitious and over-reaching, but that's exactly the point.  The story concerns humanity reaching beyond its limits, going into the unknown with only bravery at its side, and that's exactly what Nolan did here.  He went higher than perhaps he safely could, spread the film out when it would have been easy to keep it tight, made it larger than life knowing that every element wouldn't hit perfection.  Overambitious, yes, but the movie mirrors the plot, forcing audiences to go into the unknown right alongside the characters, making us pioneers as well.  It wasn't all beautiful, there were some rough patches, but isn't that part of the adventure?  To me the hardest part to accept was Jessica Chastain, who I dislike & think overacts.  But did she deter from the film?  No, she pushed me, she challenged me, and perhaps made me love the parts I enjoyed even more.

And going back to the idea of comparing this film with others in its genre, I don't see how anyone could call it a mediocre movie.  Critics loved Gravity, really liked Edge of Tomorrow, and only kinda like Interstellar?  Really?  I get that perhaps you don't think this film compares with the best sci-fi standards, but for someone who never bought into last year's hype, I think this movie makes Gravity look silly.  It has a scope that blows that one out of the water, a use of music & mood that is never cheap, a stunning barrage of imagery that makes Sandra Bullock floating around in space seem like child's play.  And perhaps this would be a good time to bring up the acting, which is light-years (pun intended) beyond that of Gravity or Edge of Tomorrow, which I actually really enjoyed.  But that's the point; Edge was very good, surprisingly so, I think most critics and audience members agree on that.  But I can't believe that Interstellar is inferior, that McConaughey was less effective than Cruise, or that the stunning visuals of this film won't follow you home and haunt your dreams.  Just because this is a hyped feature, an attempt at a masterpiece, doesn't mean that its failure to impress beyond measure indicates that it is a weak film.  Judging it against your favorites might make it seem so, but when held up against its genre associates, Interstellar shines.  It's an entertaining adventure on an epic scale, one that rarely slows down, and then only to allow us to catch our breath before plunging us back into the dark vacuum of space.  If you don't go in expecting the best film you've seen in 10 years, you just might find it. 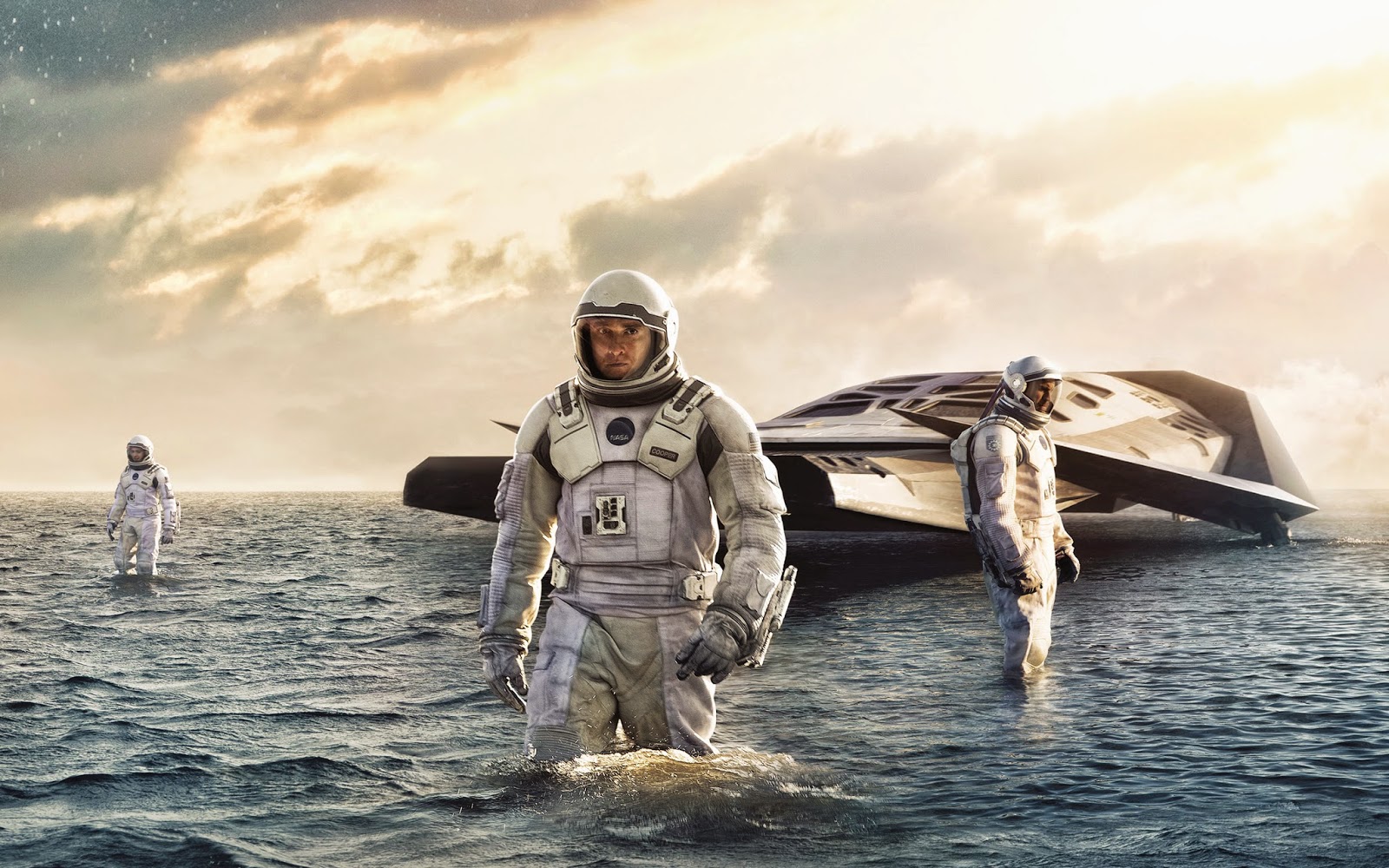