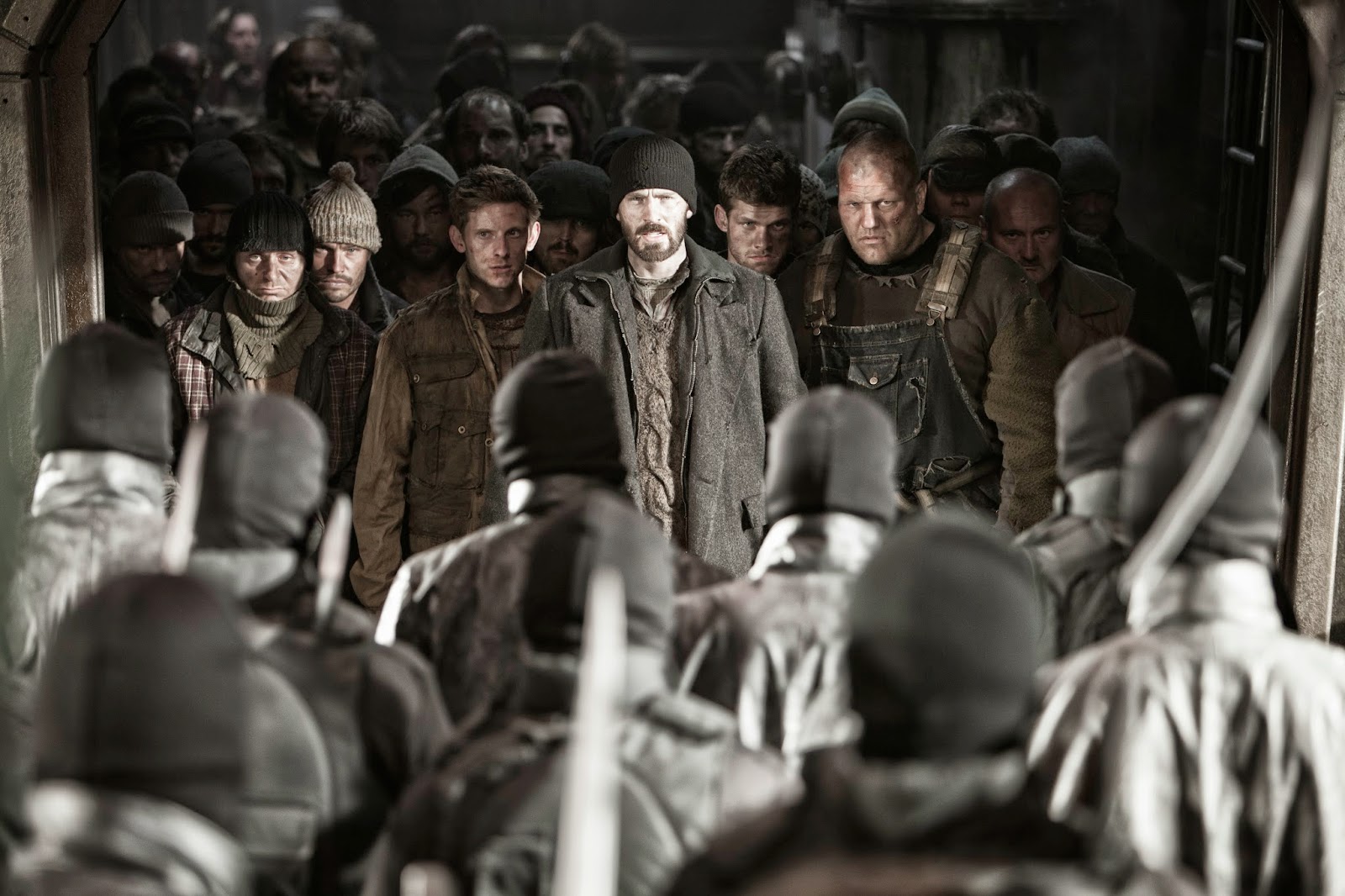 
Not very often is a sci-fi action film so well received by critics.  Snowpiercer is the quintessential post-apocalyptic fight for survival movie, one that has a lot plot-wise in common with The Colony, and yet shines where the latter collapses.  Why?  The stories are very similar, the setting is not so different, the time period is about the same, the actors are on related talent levels.  What makes one so different from the other?  Audiences and critics both agree, giving Snowpiercer a 7.0 & 8.4 out of 10 on IMDB, respectively.  They give The Colony a 5.3 & a 2.8.  Big difference in results for two films with the same general outline, one on a train, one underground, both involving desperate (and chilly) remnants of humanity just trying to survive.  But watch both and I think you'll agree; this movie succeeds where the other fails miserably.

In the near future, global warming will become a reality.  In order to fix the man-made rise in global temperatures, we will send rockets into space with the mission of controlling the weather externally.  Perhaps not surprisingly, this attempt fails, backfiring and plunging the Earth into a new Ice Age.  Everything and everyone dies, leaving the planet an uninhabitable wasteland of snow.  But mankind has not been annihilated, there is still a small number of humans who exist.  They are the passengers of Wilford's circumnavigating locomotive Snowpiercer, a train that travels the world without stopping, a home that is 100% self-sustaining.  Its engine is perpetual, its food supply is well-regulated, its water created from the ice all around, and its people perfectly ordered.  The tail passengers stay in the tail, scraping out an existence the best they can.  The front passengers live a life of ease, a life that was predetermined by their original tickets.  But a movement led by the ancient Gilliam and the brave young Curtis is about to change the new world order, bringing the back of the train forward in a rebellion that will shake the status quo.

So, cool story, ice, hungry people, all alone on the Earth; not overly original.  The train concept is a good twist, forcing us to look at life through the metaphor of a compartmentalized world.  But neither the plot nor the acting are what set Snowpiercer apart from others of its genre.  The Colony could have been as well respected as this film if it had done but two things better; improved the visual and conveyed believability.  Snowpiercer succeeded in both these areas and so succeeded on screen.  It was visually interesting, well-shot, with a style that takes a few minutes to get used to, but once accepted sweeps you away into a darkly humorous existence.  And it was believable, again after some time & effort put in on the part of the audience.  Its world comes off as possible, as well explained, as detail-oriented; something that The Colony and so many others failed to accomplish.  The characters aren't amazing, Chris Evans isn't going to blow you away, you're probably not crying at the end of the film.  But none of that matters because the story is conceptually strong, that story is presented to us in an intriguing way, and that presentation always feels like it might just be possible.  For a post-apocalyptic sci-fi action roller-coaster, you could do much, much worse.