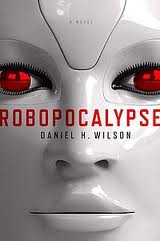 
If you read this blog on a regular basis, you know that I'm into science fiction.  If you know me personally, you know that I'm also into fantasy.  But while I love the genres, I tend to be marginally old manish about them; I like the classics and I'm skeptical about the new stuff.  As far as sci-fi goes, I like Asimov (I, Robot), I like Wells (The Time Machine), and Carl Sagan is about as modern as I get.  So when a friend recommended that I read Robopocalypse, I was intrigued but wary.  But I decided, hey, I'd give it a shot.  After tearing through it in record Coen time, I have to say that I'm  very glad I did.

The story is told almost entirely in flashback and documentation.  The main character, Cormac, perceives it as his duty to tell us about the history of the New War; a battle between man and his machines.  What started as a science project in AI during a time in which humans relied heavily on robots for domestic and military duties swiftly became a fight for survival, in which a newly liberated robotic army sought to control and pacify their former masters.  As the catalytic events of the War are uncovered, heroes emerge and their story is told in unblinking fashion.

At the start of my reading of the book, I was fairly critical.  I couldn't help but see Asimov in the details and wonder why I was reading a rip-off of his stories instead of simply reading the originals.  When I settled down I realized that all sci-fi will be a retelling of the great authors' works, just as all fantasy will be taken straight from Tolkien.  It's unavoidable, and therefor acceptable.

Putting that aside, the story, the drama, the intensity of the book was phenomenal.  I was constantly interested and thoroughly entertained.  The style of writing led to very short chapters and a very quick read, allowing me to speed through to the end, and perhaps allowing me to forgive a few failings.  The writing itself wasn't great.  Ok, it was kind of bad; it was a little cheesy and a little Hollywood.  But then again, Dreamworks owned the movie rights to this novel even before it was published, so it was literally made for the big screen, and Wilson is a robotics professor, not Stephen King.  Don't look for the next Great Expectations from Robopocalypse, but do look for it in your library and in your theatre in 2014; you will not be disappointed.