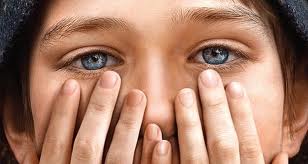 
Any film about a tragic event will be clouded by personal perspectives.  That of the director, the actors, and the audience as well.  When it's a historic event, we can remove ourselves in time and space, allowing us to judge the film as a movie about a tragedy, rather than a tragedy shown to us in movie form.  When it comes to 9/11, it is too fresh for Americans to divorce themselves from.  We were alive, we saw it, we heard it, and we felt it.  So it's difficult for us to ignore whatever emotions we experienced when talking about or watching a film about this subject.  As I review this movie, I can't help being both an American and a critic, but I'll attempt to let both speak equally.

In the wake of the devastating events of September 11th, 2001, a boy names Oskar deals with his own personal tragedy; the death of his father.  Oskar sees the world in a different light than most children, having been tested for Asperger's Syndrome but with no definitive conclusion.  The only person who understands his intelligence and his methods is his father, a German-American jeweler who likes to send his son on "reconnaissance" missions in order to force him to talk to other people and experience the world outside his own neurosis.  After finding a clue hidden inside his parents' closet, Oskar attempts his most daring mission yet, as he searches for the answer to a mystery and also for a way to recapture the memory of what he has lost.

As you might guess, this is a not a film for the weak.  It is beautiful, heart-breaking, moving, upsetting; it reopens any wounds or fears that you might have had after 9/11 and pulls them wide open.  In a time when politics and media claimed this tragedy as their own, this film is a very personal story, a microcosm of pain and suffering that anyone who has lost a loved one can relate to.  Slightly obvious and heavy handed, it is still a very real portrayal of what happened that day and how it effected the lives of so many.

Now, putting that aside, let's talk about the movie; it wasn't great.  Yes, the emotion was there, and yes it captured a feeling that is hard to put your finger on, but that has been done before and with much more skill.  The acting didn't help much, as Horn, Bullock, and even Hanks were all less than stellar, evidenced by their lack of Oscar Nominations, despite the hype surrounding this film.  The only actor deserving of a nod, Max von Sydow, got one, and most likely saved this movie from being bad.  There was beauty in this film and real pain, but there were also flaws, and sadly the flaws were big enough that, based on surprisingly low critic and audience ratings, they stopped us from loving a lovable film.