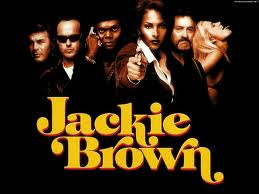 
The winner of You Vote, I Review! by mostly immoral means, Jackie Brown was the chosen film for this weekend.  My wife finally gets to watch a movie she's been trying to get me to see for a while now, and I get to watch a Tarantino film that I've never seen, albeit one of his more mild.  I was interested to see how it would stack up against Pulp Fiction or Kill Bill, great films that are high on my list.  Thankfully, Jackie did not disappoint.

With a plot that's almost impossible to summarize, it's easier to explain Jackie Brown through its origins and its characters.  The film is based on the novel Rum Punch by Elmore Leonard.  Known for his twisty crime novels, Leonard is the king of page-turners.  The story is one of relationships; Jackie (Grier) is a flight attendant who runs money from Cabo to LA for Ordell (Jackson), a gun dealer.  Ordell works with a variety of shady characters, including Louis (De Niro), Melanie (Bridgette Fonda), and Beaumont (Chris Tucker).  When Jackie gets nabbed by the cops, she and her bail bondsman work to scheme both sides and to steal a fortune from right under their noses.

Jackie Brown is a wild ride.  First, it's an ode to the blaxploitation flicks of the 1970s.  Grier was a key figure in this genre with her roles in Coffy and Foxy Brown.  It is a perfect homage to those films, creating an extremely believable 70s vibe set in the 90s.  It is also a crime novel film, establishing a hard-to-follow plot with back stabs and double crossings galore.  But ultimately, it's a Tarantino film, with his patented quotable lines, gun violence, cool characters, and general greatness.

But although it stays true to Tarantino, it is definitely a milder version of films like Reservoir Dogs or Pulp Fiction.  Perhaps working off of an established novel helped to reign him in, because it never got messy, ultra-violent, or disturbing.  And this restraint allowed for the actors to shine; Grier was hip, Jackson was cruel, De Niro was wonderfully dumb, and Robert Forster as Max Cherry the bail bondsman might have stolen the show with his perfect portrayal of a man who's life has been turned upside down by puppy love.  All in all, an incredible film with a great story, a cool vibe, and nice acting.  A very entertaining and worthwhile two and a half hours.