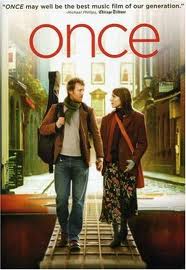 
Once in a while a film has an effect on you.  It happens.  No one is immune.  Something about a particular film gets to you in a particular way.  Maybe you can't explain it, maybe you don't understand it, but you feel it, and that's enough.  Once in a great while one film has that effect on millions of people all at the same time.  That's when you know something special has happened; when so many people, critics, audiences, everyone, feel changed by a film.  Once is that movie.  It is that feeling.  And it's undefinable.  But isn't that what makes it wonderful?

A simple love story, simply told.  Glen Hansard plays an unnamed Irishman trying to make a living in Dublin.  A self proclaimed "broken-hearted Hoover-fixer sucker guy", he works in a vacuum repair shop with his father part-time while playing guitar on the streets for money.  At night he plays his own music, songs he thinks no one wants to hear.  But he's wrong; at least one person in Dublin is interested in his talent.  Marketa Irglova plays an unnamed Czech woman, equally poor, equally lonely, and equally in love with music.


The two start a strained relationship, made difficult by his desires (a woman who hurt him but fuels his passion) and her responsibilities (a fatherless child and a meager existence).  Music ties them together and brings them closer each day, as they begin to collaborate and combine their talents into something special.  When the opportunity arises to work on an album together, a mismatched band is formed and the pair begin a new phase in their professional and possibly romantic relationships. 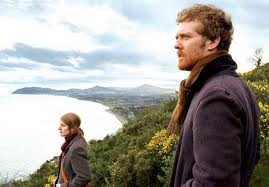 There are so many different parts to this film that are excellent, it's difficult to know where to begin.  For amateurs, the acting is great.  It helps that Glen and Marketa are basically playing themselves; struggling musicians attempting, as we all are, to survive.  No other characters really jump out, but that's actually a good thing in a movie such as this, where the two mains carry the entire story.  The dialogue is spot on as well; no forced lines, easy conversation, and a natural chemistry.


All of that is well and good, but the music makes the movie.  Not only are the songs phenomenal, but their passion drives the plot and creates that magical feeling that captured so many viewers.  Written by the actors, songs like 'Lies', 'If You Want Me', 'When Your Mind's Made Up', and the main track 'Falling Slowly' will haunt you and get stuck in your head until you have got to buy the CD.

The production of the film was surprising good.  Scenes were flawlessly tied together with music, they fit together nicely, they never dragged or felt forced.  The movie is only 85 minutes long, short for a modern movie, but it had a nice pace and didn't need to be any longer.  I can't think of much that would improve Once, and it seems as if critics and audiences both agree.  It is an excellent film, one that is worth a watch by movie buffs, music lovers, Irishman, it doesn't matter.  Good movies speak for themselves, and this one speaks loud and clear. 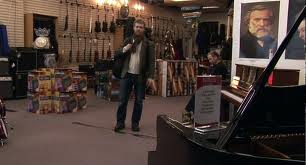 Video - At an aspect ratio of 1.85:1, the entire film was shot on a single Sony HVR-Z1.  To put that into perspective, Inception was filmed using 8 different cameras and 13 different lens series'.  Video quality was poor, but intentionally so.  It added to the raw feeling of the movie, and brought you closer to the action.

Audio - Using Dolby SR, viewers can hear the film using either English Dolby Surround or Spanish Dolby Surround.  Subtitles can be chosen in English, Spanish, or French.  Sound quality is excellent, as it, not the camera work, quickly becomes the focal point of the film.
Extras - There are two types of commentary to compliment the story: a typical commentary with Carney, Hansard, and Irglova, or a musical commentary, in which they discuss each song as it makes its first appearance in the film.  "Making a Modern Day Musical" takes viewers through the making of the film.  "More Guy, More Girl" explains a little of the motivation behind the scenes and the story.  You can watch a hand drawn comedic bit in "Broken Hearted Hoover Fixer Sucker Guy", and you can download the song 'Falling Slowly' if your computer has a DVD-rom drive.  There are also four trailers available: "Amazing Grace Trailer", "The Commitments", "Blind Dating", and "2 Days in Paris". Highly recommended.  The movie is excellent.  It has a vibe, a sound, a feeling, that most films can't even begin to grasp.  The story, the music, and even the acting are exactly what you should find when you go searching for a high-impact film.  The DVD is good.  It has unpolished camera work, but it is to add to the film, not detract from it.  Sound quality is great, and the DVD extras are interesting, if not exemplary.  All in all, a movie I have seen and would see over and over again.