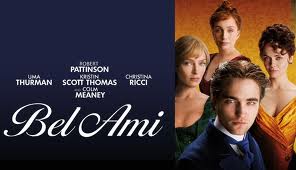 
The winner of You Vote, I Review this week was Bel Ami, a film that I didn't know a lot about past its trailer.  The directors are unknowns, Pattinson (Harry Potter, Twilight) is just coming into his own, and Ricci & Thurman have been relatively quiet since their respective hay days.  So, I wasn't sure what to expect from a period piece made from all these pieces.  Turns out, I had nothing to worry about.

The story centers around Georges, a young ex-cavalry officer in 1890s France who is trying to make a name for himself.  His dabbles in writing for a revolutionary newspaper are laughable and his luck seems to have run out; that is until he meets not influential men but their wives.  Georges' charm, looks, and luck land him in the laps of some of Paris' most beautiful and cunning women.  As he ascends the ladder of prestige, events begin to outpace him, and he struggles to find his place in this web of sex, treachery, and more power than he ever imagined.

I was very pleasantly surprised by this film.  First, the acting was terrific:  Pattinson was tortured, Ricci was sexy, and Thurman was intriguing.  Second, the pace of the film was perfect; not to fast, not too slow, with excellent music in the background driving the plot.  But perhaps the best part of the film was its relevance. This story could have been placed in any time period and come across just as well.  It could have been modern; it could have been a story of people striving for power by any means necessary right now.  And that is a the sign of a great film; a story that supersedes time & place, and has the acting prowess to support it, which is exactly what Bel Ami delivers.