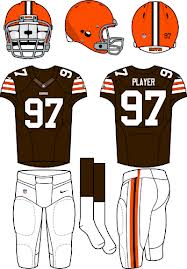 Let me preface my post with this; I like the Browns.  They have a great fan base, they play good defense, they have a long history, they're not a cocky team.  And I like the direction that they're headed; Mike Lombardi comes over to help develop the team, new coach Chud will help the offense right away, his OC Norv is good at his job, although I hate him, and Ray Horton seems to be the real deal at DC.  With a new staff and solid players like RB Richardson, OLs Mack & Thomas, NT Taylor, LBs Gocong & Jackson, CB Haden, there is hope that this team can become legitimate.

But there is one thing I would change that seems to be ignored but that could really jump-start this organization; a uniform change.  I know it sounds silly, a new color scheme can't win football games, but Cleveland has talent, they just need confidence, support, and a mental boost.  A uniform change can do these things.  It worked for the 1997 Broncos & Buccaneers.  It worked for the 2000 Rams.  It can work for the 2013 Browns.

Look at the picture up top.  Yes, those are the current uniforms.  They call themselves the Browns and have chosen the color orange as their logo.  Ridiculous.  This isn't Halloween, you're not a piece of candy corn, think outside the box!  I'm not suggesting throwing away history, but a revamp is necessary and could help change the culture of what has become a losing team.  Check out these pics below. 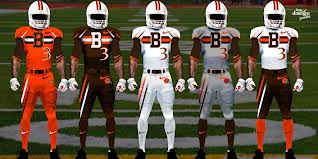 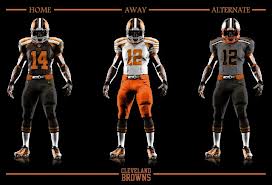 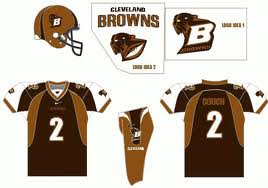 Any of these concepts is an improvement over the current uniforms.  And they show that you can still
honor your past while keeping up with the modern era.  The orange helmets have GOT to go, obviously.  And some sort of symbol is needed, even if it's just the letter 'B'.  I really like the first picture and I think Browns fans could get on board with it as well.  While playing Madden I created a Browns look featuring a bulldog with colors and symbols much like the third picture, but I think this is perhaps too deviant from the current standard.

Whichever way you want to do it, I think it's past time to make some waves.  Change your uniforms, change your colors, change your attitude, but change something so that the improvements you've made in the off-season don't go to waste.