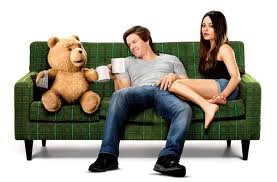 I might me a little obsessed with the Academy Awards right now, but let's take a break from that and talk about a movie that never aspired to be anything close to Oscar-worthy; Ted.  I had no real plans to watch this movie, not being a huge fan of raunchy comedies, but I was hanging out with a friend and this was available, so we thought why not, a guy's night is a perfect time to watch a guy's movie.  Turns out, it may have been the best time to watch it, but apparently timing doesn't magically turn crap into something good.

The title character, Ted, is a talking bear.  Yes he's stuffed, but he's alive; he feels, he laughs, he smokes pot, and he's a pal to the end.  His best friend John is all grown up, but still lives and often sleeps with his teddy bear buddy.  This cause trouble with his live-in girlfriend Lori, as he can never fully turn into an adult and start taking life seriously as long as he's skipping work to get stoned.  As John and Lori's relationship hits a breaking point, Ted has to help his friend move on, which might just mean that he has to move out.

It's as bad as it sounds.  It's not awful, but it's bad.  I felt confused through most of the movie, as it skipped back and forth between being a parody of a kid's movie, a raunchy romp, a chick flick, a homage to the 80s, while doing each of these quite poorly.  I don't mind crass humor, but it was pointless and juvenile.  I don't mind a love story, but it was terribly acted and frigid.  I don't even mind the occasional cameo, but don't just throw Nora Jones into your movie for no reason and expect me not to question it.  McFarlane's first attempt at a movie failed, as it was a step down from Family Guy, and that's not what you want.

Positives?  I like Marky Mark, he's cool and can be very funny.  He and Ted actually played off each other well and I laughed quite a bit.  Trouble is, my laughs were mainly "did that just happen?" laughs, as I tried to decide whether or not to be offended by every joke.  Mila Kunis is hot ...and that's about it.  Joel McHale was about as horrible an actor as is humanly possible.  So, no, not very many positives.  I can't think of anyone that I would recommend this to, other than a boy who's young enough to laugh at fart jokes, but then he wouldn't be old enough to watch any of the rest of the movie, so that's out.  Pass on grass, people.  And pass on Ted.