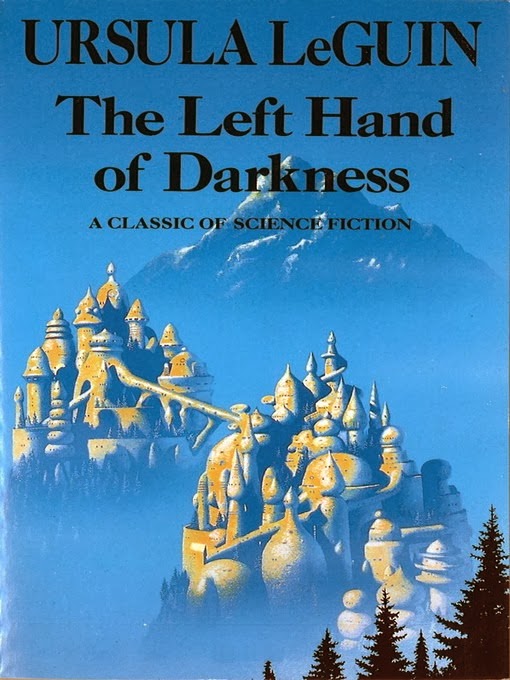 
Well-crafted science fiction can be a thing of beauty.  It can take us to another world, show us a different life, imagine the changes of the future, preview technology, paint pictures of our dreams.  But it can also speak to us about our current world.  Sci-fi is not just a look into the far reaches of space, it's an introspective criticism of today, how we act, what we choose, and why these decisions may affect the lives we will lead years from now.  Sci-fi takes our current cultural path into account and attempts to predict where humanity will be fifty, a hundred, or thousands of years into the future.  And so every story in this genre should be dissected to explore the deeper meanings of the plot, but none more so than The Left Hand of Darkness, a book designed specifically to bring our own societal flaws to the forefront and to expose the mistakes of mankind.

Genly Ai is an alien in an alien world.  He comes from Earth, where it and many other planets have joined together to create a peaceful & profitable alliance, called the Ekumen.  The Ekumen have sent Ai to a newly found planet to convince them to join the federation.  This small world, called Gethen, is in the midst of an ice age, earning it the nickname Winter.  There, Ai attempts to convince the king of the great nation of Karhide to believe his story and accept the open invitation from the Ekumen.  But the society of Gethen is too complicated for a simple yes or no.  First, the countries of Karhide and neighboring Orgoreyn are close to war, a first for the history of the planet.  And secondly, the humans of Gethen are not like the humans of Earth; they are neither male nor female.  Instead, they go through a monthly cycle in which they temporarily display sexual organs, a period called kemmer.  Only during kemmer do they show any gender, making them automatically both curious & cautious around a constant male like Genly Ai.  But his mission is incredibly important to the future of Gethen, and with the help of an uncertain ally named Estraven, Ai will try his best to convince whichever power will listen that he is indeed an alien, that he comes in peace, and that the fate of the planet is balanced on a very dangerous edge.

There's so much to touch upon when discussing this book.  The sci-fi element alone is fascinating; the distant planet, Ai's mission to there, the constant freezing temperatures of the world, the continents that make up the planet, the technology that allows Ai to travel and to communicate with his orbiting ship.  It's a well-written science fiction story, filled with great detail and exhibiting an amazing imagination.  But the technical aspects aren't really even the point.  It's the societal messages that become the best part of the book.  Le Guin is a feminist sociologist and you can tell it in her writing.  She has so much to say about human gender roles, the division of the sexes, the distribution of power among the wealthy & poor, the advancement of culture over a given time, the religious dogma that is always in the background.  Life on Gethen is just an accurate portrait of life on Earth, excellently depicted and shockingly revealing.  And then there's the dramatic side of the story, the relationship between Ai & Estraven, the unlikely bond they form, the lessons that we the readers learn from their interaction.  There are dozens of different reasons that The Left Hand of Darkness is one of the best novels I have ever read.  You had better enjoy the genre, be interested in sociology, be prepared to jump right into a culture that doesn't make much sense immediately, and allow the fictional language barrier to work itself out.  But if you can do those things, you'll be rewarded with a magnificent story set in an beautiful land and written to near perfection.