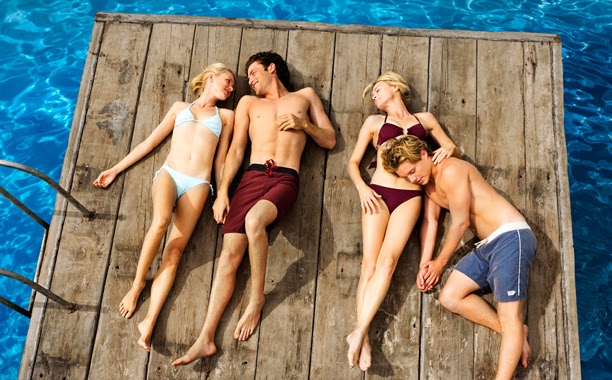 
Critics really hate this movie.  Its Metascore on IMDB is 3.7 out of 10, while users give it a 6.2.  Not great scores either way, but that's a pretty big discrepancy.  When critics and audiences disagree so much I tend to find myself smack dab in the middle, understanding both viewpoints and generally splitting the difference.  But I wanted to like this movie going in, I didn't want it to be a 5 out of 10 or, in my star system, a low three stars.  I wanted it to be great and it definitely had the pieces to pull it off.  A great locale, two under-appreciated & beautiful actresses, an artistic director.  But I can't say I'm surprised that I ended up barely liking the movie, rating it three stars, and landing right in the middle of the debate once again.

This is a story of mothers and sons, but also of love breaking all barriers.  Roz & Lil are best friends, have been since childhood, connected deeply & emotionally.  They live on the coast of Australia, lead pampered lives, and spend the majority of their time drinking, swimming, and soaking up the sun.  They each have a son and each of these boys grows up to be a handsome young man.  And that's where the problems start.  Each mother falls for the other's child, creating a strange foursome of lovers who never cross the line of incest, but might as well since all four are basically one family unit.  Life attempts to move the group in different directions; new jobs, new lovers, advancing age.  But nothing seems to be more powerful than their love for each other, the pull of the beach, and the bond that can never be broken.

Some people might find this to be a disturbing story.  After all, these young men are having sex with women who are basically second mothers to them.  That part of the plot raises a lot of questions on the topic of morality, and it may be too much for some to handle.  But the taboo nature of the story aside, there are some great parts to this film.  Both actresses are excellent as aging women who fall in love despite themselves, both playing their parts brilliantly.  And the scenery of the movie was enough to keep me watching; beautiful beaches, perfect weather, relaxing scenes.  I wanted to immediately move to Australia.  But taking the film as a whole, it's not amazing.  It goes too slowly too often, it's over-dramatic at times, it spans too many years, and neither of the boys is a great actor.  At the end, I found myself shrugging, as if to say "OK, that was fine" but I don't see myself remembering it or thinking about it past writing this review.  I don't agree with the critics that it was awful, and I don't agree with users that it was good.  It was somewhere in between for me, though perhaps polarizing for others.  You'll just have to check it out yourself if you're intrigued; it's not a waste of time but don't expect a lot.