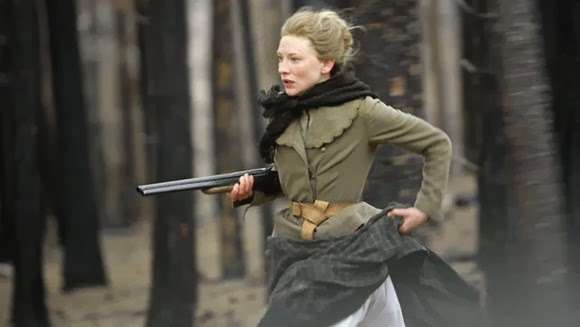 
Every once in a while I have a "how'd I miss that?" moment.  I mean, I have a Watchlist of 700+ movies, there are a ton of good ones I know I need to see, there's just not enough time in a day.  But with The Missing I somehow forgot its existence.  I stumbled across it on Netflix, remembered that I had heard of it, and then wondered why I hadn't watched it in the eleven years since its release.  After all, the pieces are there.  Ron Howard, a solid director of a lot of good stuff.  Cate Blanchett, perhaps the best actress of the last twenty years.  Tommy Lee Jones, an actor that Lonesome Dove made me love.  And an epic Western setting, putting the film in a genre that's hard not to enjoy.  Well, some movies prove that random pieces don't make a perfect puzzle and that there might be a reason why so many people chose to overlook them.

The Gilkesons are a hard-nosed New Mexico family living on their own land, their own wit, and making due.  Maggie is a doctor of sorts, a healer who runs a tight ship at home.  Her daughters, Lilly & Dot, are as different as can be; the elder a proper girl, the younger a tough farmhand.  And then there's Brake, Maggie's lover and protector of the bunch.  But the family dynamic changes when one more member comes to town; Maggie's estranged father Samuel Jones, an Indian by all but birth, a wild & hard man.  He's not welcome at the farm past one night's rest, but when tragedy strikes he might be the only one who can help.  Lilly is kidnapped by a group of renegade Army scouts, dangerous men who aim to sell women for a large profit down in Mexico.  The leader of the group is a brujo, or Indian witchdoctor, and he's not a man who can be defeated easily.  But Maggie, Samuel, and Dot head out on the trail, tracking down the evil men with rescue on their minds.

There were a lot of missed (pun intended) opportunities in this film.  The actors are all strong, but ill-used.  Blanchett, Jones, Even Rachel Wood, Aaron Eckhart, Val Kilmer; I'm not saying that they're all legendary, but they all have talent and their skills were not well-displayed here.  Blanchett & Jones were one note, while Wood, Eckhart, & Kilmer were barely featured.  Had the movie played upon their strengths I think I would have enjoyed it much more.  As it was, there was too much posse-riding-through-the-canyons, too much voodoo, too many over-dramatic moments, and not enough real grit to really get audiences in the Western spirit.  If you want a similar film better done check out The Searchers, a John Wayne classic that's at least two stars superior.  It's not that The Missing was awful, it just failed to grab me and could have been so much stronger, edgier, and more realistic.  I guess there was a reason why I totally forgot about this film; I wish I hadn't remembered.