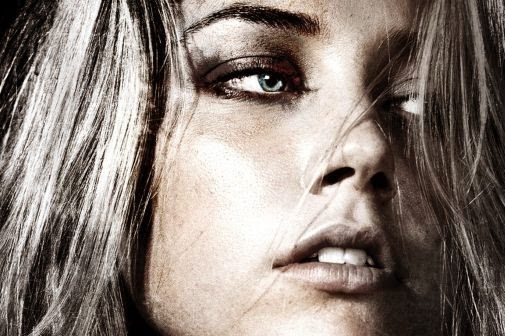 
If you've read my Cabin in the Woods review, or any of my horror reviews for that matter, you'll know I'm a fan of the genre.  I tend to give 'em some slack, turn a blind eye to some of the obvious issues, because I enjoy the campy & silly sides of these movies.  Sometimes I'm surprised by actual high quality or actual originality, as with Cabin.  And sometimes it's the opposite; so horrible even I can't pretend that I'm enjoying what I'm watching.  Such is the case with All the Boys Love Mandy Lane.  It might have followed the standard horror plot, but it failed to deliver anything worth seeing.  As far as the genre goes, these two films are on either end of the spectrum, taking the same idea but producing two very different results.

Mandy Lane turned hot over the summer.  She may have been an outcast before, but now she's the It Girl and everyone wants to be her friend.  Girls want to be her, guys want to do her, and Mandy just wants to fit in.  So when a group of buddies invite her to a ranch for the weekend, she takes it as an opportunity to bond with her peers.  And so the cliche gang forms: Mandy the virginal beauty, Chloe the skinny bitch, Red the pothead, Bird the token black guy, Marlin the whore, Jake the jock.  Add in a hunky farmhand & a killer on the loose and you've got the makings of a horror standard with the usual question on everyone's mind; who will survive the night?!

There's not much to say about this one other than that it's crappy.  Perhaps to people who don't enjoy the genre this movie and others in its group all seem the same.  But to me, even though the setups are the same, films of this kind can go many different ways depending on the details.  The stories are usually similar, but the directing, acting, music, editing, comedy, believability; these things can come together to make a great horror movie or they can be completely absent and destroy whatever it was that the filmmakers were trying to create.  In the case of Mandy Lane, it was all missing.  Horrible acting, scenes that dragged, a ridiculous "twist", stupid characters; it was one of the worst attempts at good slasher fun that I have ever seen.