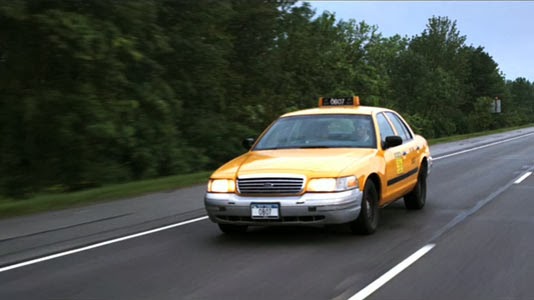 
I stumbled upon this movie while watching something else; it was a trailer before the film.  And it caught my eye for a lot of reasons.  One was that Sam Jaeger wrote, directed, and starred in the movie.  That always makes me curious, because that is a lot of yourself to pour into a project.  Sometimes it bombs and sometimes it's excellent, but it's usually not somewhere in the middle.  The other factoid that got my attention was that Jaeger cast his real-life wife as the love interest that would play opposite himself.  Would that make the chemistry in the film better or worse, natural or awkward?  So I was excited to watch Take Me Home so that my questions would be answered, and I was rewarded with a solid rom/com with a dash of originality.

Thom & Claire are not having good days.  Thom is flat broke, no real job, and has just been kicked out of his apartment.  He's a photographer who can't find work, so he drives around an independent taxi to make due.  Claire is a wealthy married executive who is fairly certain that her husband is cheating.  She just wants out of the city, to escape her complicated life for a while.  And here's where they meet, Claire jumping in a taxi and ordering the driver to go anywhere, Thom more than happy to chauffeur her all night as long as the money keeps coming.  But when the two realize that neither of them really want to return to the city, they turn a simple cab ride into a road trip, getting to know each other & themselves along the way.

Yes it's a rom/com and yes I've been watching too many lately, but Take Me Home is actually a good one.  First off, it's not extremely famous people phoning in performances to make a few million bucks.  It's a guy who put everything into a film; his time, his money, his talent, and even his wife.  The personal touch was obvious and movie was better because of it.  The story might be a little cliche, two people who don't get along at first but will eventually fall in love.  But the delivery was good & honest enough to support the old plot.  Sam Jaeger was really superb; funny, fluid, natural.  Amber Jaeger wasn't any of those things though, and she was definitely a weak point when called upon to be dramatic.  But the film as a whole worked because it attempted to be more than typical, there was a lot of unspoken tension, and I really enjoy when not every nuance is explained out loud, when the director lets the audience figure things out by reading the characters faces and subtle messages.  By the end I got a bit bored perhaps as the action slowed way down, but at that point I was invested enough to forgive a little sap and appreciate a strong movie that obviously tried hard to be more than your normal romantic drivel.