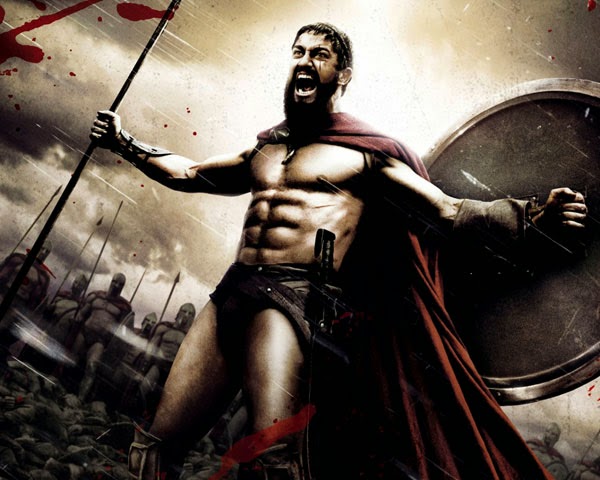 I've never been a fan of "graphic novels".  I think they're the cheap middle ground between novels & films, lacking both the depth of a good book and the vision of a good movie.  If I wanted to read the story I'd want more than word blurbs, and if I wanted to see the story I'd want more than still images.  So I see comic books as a waste of time, but they do spawn some very interesting characters, I'll give them that.  Superman, Spiderman, Batman, just to name a few super heroes; great figures with cool back stories that have led to a lot of movies, some excellent some awful.  But here's something a little bit different, which makes a big different to me.  300 is a graphic novel about a historic event, dramatized of course, but brought to life in a very creative way.  And then that story is transferred to the big screen, keeping the artistic elements of the comic in tact but delivering a film that gives you a live action account of an incredibly epic event.

Leonidas is king of Sparta, a militant state of Greece.  The year is 480 B.C. and the greatest empire in all the world in Persian.  The lord of Persia and self-titled god-king is Xerxes, who sees himself as anointed ruler of all the world.  The Spartans are asked to bow down to their new king, along with the rest of Greece, or face annihilation by the largest army the planet has ever known.  The oracle and many leading politicians believe that Sparta should just bend knee, but King Leonidas thinks otherwise.  He leads a band of 300 warriors to meet the Persians on the shores of Greece, at a place called Thermopylae, or the Hot Gates.  There the giant army's numbers will count for nothing as man will fight against man in a tiny pass through the mountains.  If Leonidas can hold the Gates against Xerxes all of Greece might soon rally to his aid, proving the might of Sparta and the courage of its people.

This film has all the elements to make it great: a "true" story, an artistic approach, and action that will knock your socks off.  I may not like comics, but what Snyder did here was pretty genius.  He took the graphic novel, kept the beautiful colors & images, and transferred that to film.  It's like watching the pages of the comic come to life, and with history backing the story up it never feels like a wasted effort.  The death, the blood, the soldiers; everything feels slightly fake, but in good way, like you're watching a series of paintings fly past your eyes.  And that makes the violence more acceptable, less gruesome, because it's portrayed as a drawing rather than real life.  I wish the acting was as good as the visuals, but sadly it's just OK with a few moments of crap.  It's just not strong, nor was the dialogue, so 300 becomes eye candy & awesome, but never amazing.  The movie is history come to life, scene after scene of stunning artwork, and something that is incredibly enjoyable to watch.  It's kept from being a wonderful film by a lack of strong acting & an overuse of cheesy lines, but that doesn't stop it from being both entertaining & visually appealing, a wild & bloody ride.