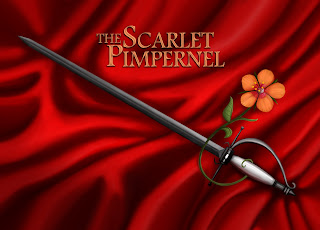 
This was one of those movies that could only exceed expectations, but only because expectations were decidedly low.  CBS produced this version of the classic Baroness Orczy novel in 1982, casting Seymour (Dr. Quinn, Medicine Woman), Andrews (The King's Speech), and McKellan (The Lord of the Rings).  However, The Scarlet Pimpernel was aired long before these actors became known for these projects.  So, what we have is a made-for-TV movie about a swashbuckling fop starring relative unknowns broadcast on network TV in the 80s.  Sounds like a recipe for disaster.  But looks can be deceiving, and that, as the saying goes, is why you play the game.  What should have been a ridiculous waste of time turned out to be a solid piece of cinema that surprised audiences and launched careers.  Bravo, CBS, bravo. 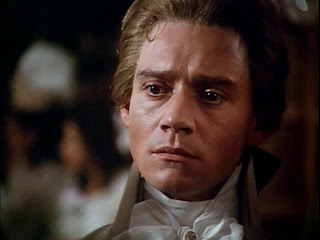 The story was written in 1903 for the stage, the novel appeared in 1905 and was an instant success.  The title character went on to appear in countless volumes, adaptations, and references, and, although the history behind the story is factual, the rest is purely fictitious.  The plot is driven by the Reign of Terror during the French Revolution of the 1790s.  The common people had overthrown the French aristocracy and were beheading nobles by the dozens each day by way of the guillotine.  Many in England saw the political murders as unacceptable atrocities, among them Sir Percy Blakeney, secretly know as the Scarlet Pimpernel.  Hiding behind the facade of a vain, foolish, spoiled aristocrat, Percy works tirelessly in Paris to save as many noble families from a cruel death as possible.  A master of disguises, he usea wit and trickery to evade capture, protect the innocent, and bring justice back to France.

Things are going swimmingly for Sir Blakeney, and plans are in place to rescue the young Dauphin from captivity next.  But love has a way of complicating matters, and even the elusive Scarlet Pimpernel can fall victim to its power.  The beautiful French actress Marguerite St. Just has captured the heart of our hero, and his marriage to her might ruin everything.  She was once the beloved of the ruthless Chauvelin, a man who will stop at nothing to kill the cunning Pimpernel.  As he doggedly hounds his quarry and viciously manipulates his lost love, Chauvelin comes closer and closer to discovering the true identity of his adversary.  Even Marguerite does not know her husband's secrets, as he cannot fully trust her, and this mistrust leads to betrayal, coercion, and finally to a stunning climax in which the Scarlet Pimpernel must pull off his more daring escapade yet, all while winning back the heart of his one true love. 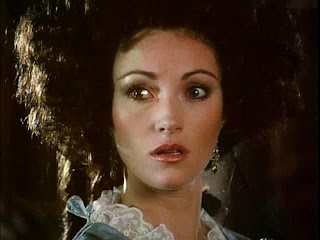 It would be safe to say that I was surprised by how much I liked this film.  I wasn't expecting much from a made-for-TV movie starring Dr. Quinn, but The Scarlet Pimpernel really delivered.  First, the story was very interesting.  The time period was well represented and it was like a very quick history lesson on the origins of modern France.  The common hero role was reversed, as he was a rich man saving the lives of aristocrats from the rebellious working class, instead of a Robin Hood-like figure.  The movie stayed very closely to the book with all plot lines touched at some point.  At times this led to a little confusion, especially with the role call of French names, but as long as you stayed attentive the characters names are repeated enough that you can eventually get them all straight.

And the acting may have been the most surprising aspect of all.  Jame Seymour was good, but not amazing.  Again, I wasn't expecting too much, not after seeing a couple Open Hearts Collection commercials, so the bar was set pretty low.  But she was beautiful and vulnerable, and that really made her character.  Anthony Andrews was a perfect Sir Blakeney, combining silly English nobility with heroic bravery.  At first his foppish accent, dress, and demeanor were so ridiculous that they were a little off-putting, but when you see the real Percy after dropping the act, you realize that you just witnessed some A-class acting.  And speaking of, Ian McKellen stole the show.  He was ruthless, cunning, tortured, and I believed every second of it.

The quality of the film was exactly what you would expect from the 80s, so there was nothing to get excited about there.  It was often like watching a homemade movie; scenes shot outside were just fine but indoors everything became dark and grainy.  Side characters were not very well developed or acted.  Costumes were fairly accurate and well-made, but not special.  So, as far as period pieces go, The Scarlet Pimpernel wasn't the best, but it definitely wasn't the worst either.  It was a surprisingly captivating movie that smartly stayed true to a classic novel, and therefore didn't go astray.  The acting was better than average and the pace was fairly fast for it's 136 minutes.  All in all, a strong film that is better than its made-for-TV label. 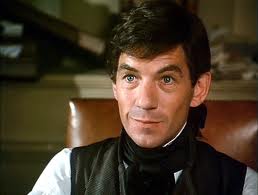 Video - With an aspect ratio of 1.33:1 (4:3), don't get excited about the DVD.  You don't get an HD picture or a widescreen format.  What you do get is a message at the beginning of the movie basically apologizing for the poor video transfer.  If I learned one thing in Speech class it's that you never start with an apology, it makes your audience expect to not like what's coming.

Audio - The only sound option on the DVD is whether to turn the subtitles on or off.  Again, the lack of features isn't exactly surprising.  The audio during the movie was fine; I didn't notice any glaring problems.  But don't expect much from what may be a difficult word to swallow; Mono.

Extras - There are zero extras on the DVD.  No commentary, interviews, special features, bonus scenes, nothing.  Not shocking exactly, but not very interesting either. 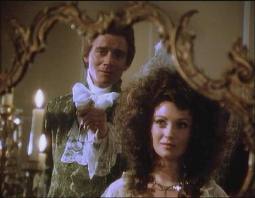 Recommended.  The Scarlet Pimpernel went above and beyond my expectations of a CBS special presentation.  Based on a classic novel, it had a strong foundation and an interesting history to use as guidelines, and it didn't fail to use them well.  Excellent acting from before-they-were-stars, cool characters, and a quick plot combined to make a good movie.  The video, audio, and extras were poor, but not unexpected.  So, save it for a rainy day, don't expect much out of your HDTV, and enjoy a charming movie that you will remember fondly.