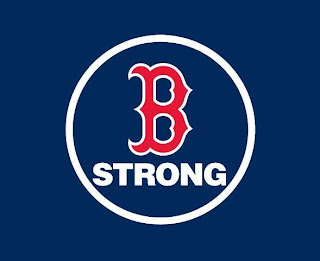 When a tragedy occurs, my first reaction is cynicism.  I see my lack of compassion as a character flaw that I have to live with, but I don't necessarily think that it makes me a bad person.  There are plenty of helpful and giving people out there who make a difference every day; I just don't happen to be one of them.  Call me callus, but I just don't get very gushy.

I'm going to go out on a limb and say that most people don't care so much that it hurts and that most people are as selfish as I am.  I don't see selfishness as evil; you are you and your life, by definition, revolves around you.  And this belief is why I get so cynical and grumpy when I see the masses being falsely sincere and emotional.

Let's look at the recent Boston tragedy, and let's try to keep an open mind.  It was an awful thing that happened.  As the husband of a marathon runner, my mind immediately went to the finish line and picturing myself and my two kids standing there waiting for her to cross.  How horrible it must have been for the people there, their families, and the people of Boston who will be living in fear for quite some time now.  But as bad a thing as it was, it only directly affected a handful of people.  Chances are you weren't there, you didn't know anybody there, and your life has not changed in any way since that day.  So why do you feel the urge to post on FaceBook that you're thinking about Boston today, or that you're praying for some strangers, or that America will get whoever did this and make them pay?  The answer; because you're thinking about yourself.  You're attempting to feel what it might have been like to be there because that makes you feel alive.  You're putting yourself into a group that you're not really a part of because it's nice to be a part of something.  We are all of us very selfish people who show it in very unusual ways.  I just happen to write it on a blog.

Maybe I'm being insensitive.  Maybe it's too soon, or you think you really do care, or it really was that bad.  But I just don't think so.  I think people, especially we as Americans, are extremely short-sighted and that this wasn't really as horrible as we're making it out to be for our own selfish reasons.  Take a look at this article.  I am struck by the quote, "In Syria, it's not Boston every day, but many times per day."  We are extremely lucky to live in this country.  It's far from perfect and let's not kid ourselves and claim that it's the best place in the world, but the majority of us are wealthy, safe, and free.  This is not the case in most countries.  Not every one has terrorist violence every single day, but a lot do.  And so when something bad happens here, when three people die, when we feel a little shaken, we band together and cry and seek justice and feel angry and post things on FaceBook and very soon we forget all about it.  Why?  Because we can.  Because that is a luxury we can afford; forgetting that awful thing that once happened because it only happens once every few years.

I guess my point is that we could all be a little more "real".  The attack in Boston was awful, but worst things happen every day all over the world and we don't even care.  We don't care because we're selfish, because we're safe, because we're us and they're them.  So maybe we should stop saying how horrible we feel, how we'll never forget this, and how tight we are as a country now, when in reality we're getting a little high from the excitement and in six months we won't remember it.  Maybe we shouldn't pretend to be moved by pictures of sobbing families when what we really like are pictures of bloody streets. We are all, selfishly, getting something out of this tragedy, and perhaps that's a cynical thing to say, but then again no one ever accused me of being warm and fuzzy.
Posted by Olie Coen at 6:49 PM