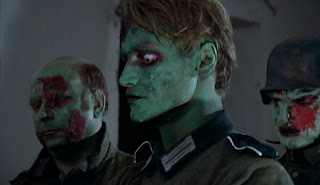 I have a weak spot for zombie movies.  The whole idea is utterly ridiculous, yet somehow believable.  And that's why there are so many books, TV shows, and movies based on zombies; because people love to laugh at them but can't stop thinking that it just might be possible.  Now, the premise of Zombie Lake might seem grossly unfathomable when compared to other films in it's genre, like World War Z.  But it doesn't really matter, because it has everything you could ever want from a zombie movie and more; hideous walking dead, frightened townspeople, devilish secrets, nakedly gallivanting women, guns, neck-biting, hands creepily poking out of swampy water.  You couldn't ask for more from a horror flick, especially from such a classic that paved the way for so many other wonderfully awful moves to follow. 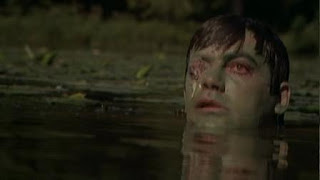 Zombie Lake is a French film, originally titled La Lac des Morts Vivants.  Set in a small town in a remote part of France, the story is deceptively simple; nearby is a haunted lake that no one knowingly dares approach.  The locals know its secret and keep their own people safe by never allowing anyone near.  However, unsuspecting travelers sometimes journey too close, and what they discover at their own peril is a gruesome truth; the lake is the home to a small but deadly group of zombies.  These undead kill anyone who ventures to near their lair, and recently they have become more brave.  The monsters are starting to enter the town itself, viciously killing anyone they come in contact with.  No one is safe, no one can help, and no one stands a chance against these bloodthirsty zombies.

However, perhaps there is a way in which these evil spirits can be defeated.  Their weakness lies within their secret, the truth that the town has kept hidden all these years.  During World War II, this small village was a part of the French Resistance, and played a part in the battle against the Huns.  A band of retreating German soldiers was ambushed here, killed, and thrown into the lake.  Now their souls cannot rest, as they await vengeance for their deaths.  As this secret is discovered, more hidden truths surface; a love story, a child, a heart-sick soldier, a necklace, and the key to the destruction of the zombies that call the lake their home. 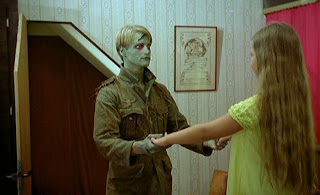 Don't laugh too hard, it's not as bad as it might sound.  But yes, it's a zombie movie and it tends to get a little silly.  The undead soldiers waltzing out of the lake look more unhappy than frightening, and the "gruesome" killings look more like someone spilled a bit of red food coloring than someone's neck was bitten in half.  Of course, you've got the classic stiff walk, the wide eyes, the screaming populace, and the naked chicks.  And are there a lot of those.  At one point an entire female sports team spontaneously decide to go skinny dipping in the murky, haunted lake.  Not a great idea, ladies, not at all.  Keep your clothes on next time.

So while it was a little juvenile, there were some moments that elevated it above the normal zombie drivel.  The love story was actually quite touching; a German soldier led by fate to meet and fall in love with a local French girl.  There subsequent love affair, separation, longing, and secret were all fairly well done.  Fast forward to the soldier, now a zombie, looking for his lost love, trying to reconnect with the happiness he had once found.  Not bad stuff, and the juxtaposition of this story with the lake-residing undead created something pretty real and interesting.  That said, it didn't make the film an art-house picture, but it's something.

It could have been worse, it really could have.  The production of the film was good enough to keep the whole idea from being stupid.  The directing was good; scenes were quick and shot well.  The acting, as much as there was, held its own.  And I found myself enjoying the movie for what it was and not judging it too harshly.  Yes, it was silly; storm-troopers meandering around killing women in their underwear, villagers shooting at ghosts with old pistols, women feeling the random urge to get naked.  But the back story, the love story, and the originality of the film kept it afloat, as much as the fact that it was an 80s zombie film that really set a tone for those yet to come. 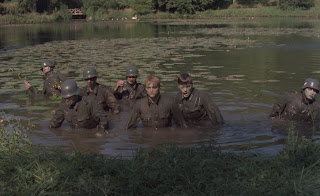 Video - With an aspect ratio of 1.66:1, the video quality was what you would expect.  The ratio is standard for European films, and although not excellent, it's just a step below HD quality.  Keep in mind this movie was shot in the 80s and technology just wasn't what it is today.  Don't judge the picture too harshly, but don't expect too much.

Audio - There are some interesting audio options with the DVD.  First, the film is in French.  You can watch the film with French or English subtitles.  You can also choose for the film to be played in its original language or to be dubbed in English.  French with English subtitles might make for a more realistic viewing, but English dubbing is almost too comical to pass up.  Either way, the film sound being in mono leads to a less than stellar audio experience.

Extras - The first option in the extras section is to watch the beginning credits in English.  Now, as the beginning credits feature an extended view of a beautiful nude woman, you may or may not want to watch the opening in two different formats, depending on personal preference.  Also, there are two scenes on the DVD that you can watch in their edited/less explicit form.  Lastly, there are five trailers: Zombie Lake (French), Zombie Lake (English), Oasis of the Zombies, The Rape of the Vampire, and The Demoniacs. 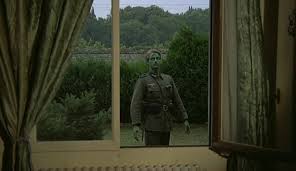 Recommended.  For any zombie movie enthusiast, this is a must see.  For everyone else, there are many redeeming qualities, but what you mainly get is a silly movie about the walking dead.  There are the typical blood-spurting, breast-jiggling moments, but there are some surprisingly tender moments as well, which make Zombie Lake a watchable b-movie.  Poor video and audio quality don't add to the experience, but the DVD itself has some interesting audio and extra options that are entertaining.  All in all, a good film that is far from great.