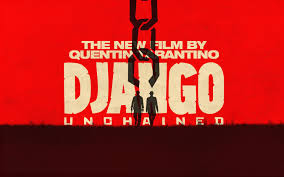 
You just can't talk about a Tarantino film without talking about other Tarantino films.  Some directors work picture to picture; it seems like he is working on one gigantic, gory magnum opus.  And perhaps this opus can be broken down into two parts: Crime and Punishment.  Crime would be made up of Reservoir Dogs, Pulp Fiction, and Jackie Brown; films based on heists, thugs, and good plans gone bad.  Punishment would be made up of Kill Bill, Inglorious Basterds, and Django Unchained; films based on revenge, murder, and bullets to the brain.  Not everyone is into both parts of the bigger picture; some people don't like the Elmore Leonard crime caper and some people don't like the gun-slinging blood bath.  But whatever our tastes are, we can't deny the genius of Quentin Tarantino and we can't resist the magic of his films, be they cooly criminal or violently vengeful.


Django Unchained is a remake/spoof/homage to the classic cowboy movie series starring Franco Nero.  Tarantino loves this 60s spaghetti western, using it as an inspiration for Kill Bill as well.  Nero even makes a cameo in the film, when the old Django meets the new.  The modern version is played by Jamie Foxx, portraying an ex-slave who's only goal is the rescue of his wife.  Teaming up with the bounty hunter Dr. Schultz, Django begins a killing spree that he hopes will end with a happy reunion.  Along the way the duo fight violent lawmen, slave owners, the KKK, and Calvin Candie, a ruthless southern aristocrat who owns Django's wife Hildy and runs the gruesome Mandingo fighting circle.  The team must infiltrate Candie's plantation, outsmart the villain, rescue Hildy, and make their escape; a task that turns out to be both very difficult and very bloody.


In Kill Bill Tarantino mixed spaghetti westerns with kung fu.  In Django Unchained he mixed them with slavery, and the result was surprisingly awesome.  The film was a mix of extremely cool moments and laugh-out-loud humor.  It was a perfect blend of farce and honesty, and the result was a completely original take on classic cinema.  Of course, there was the patented Tarantino violence in almost every scene; blood sprayed almost constantly, sometimes comically and sometimes disgustingly.  There were explosions, gun fights, tortures, dogs ripping people to pieces, and more bullet wounds than you could count.  But if you can stomach the bloodshed then you're left with a film that is truly wonderful.

And let's touch on the acting as well, since there was so much Oscar buzz surrounding the film.  Jamie Foxx was good, not great.  He was cool and believable, but nothing to write home about, and it's not surprising that he wasn't nominated for Best Actor.  What is surprising though is that Leo wasn't given much credit for his role.  He was vicious, insane, and as spot on as ever.  I'm not saying he would have beat out Waltz for Best Supporting, who was about as perfect as an actor could be and won the award himself, but he deserved a nod.  Even the cameos were fun and well developed; Don Johnson, Jonah Hill, Bruce Dern, Samuel L. Jackson.  The film, adding up all of these elements, deserved to beat out Argo for best picture.  It was directed, acted, and produced at a higher quality, it just wasn't about the Middle East.  Django Unchained is an immensely entertaining movie, a well-made film, and just another piece of the puzzle in Tarantino's life work.  Next up, Kill Bill Vol. 3.