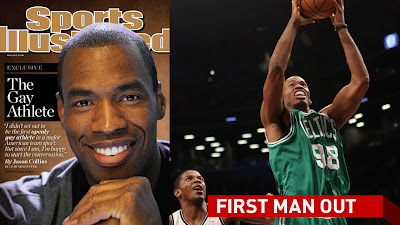 In recent years the hot button equal rights issue was "gays in the military", the topic coming to a head with the repealing of Don't Ask, Don't Tell.  Then it was marriage equality, which is up in front of the Supreme Court right now.  The equal rights argument of the future is "gays & sports".  Here are my thoughts on the matter:

Today the very first openly gay athlete to be currently playing on a major American sports team came out of the closet.  Jason Collins will go down in history as a pioneer, although he says he wasn't looking for that title.  You can read the story here, which was done for Sports Illustrated.  This is a pretty big step for the gay community and for equal rights, as it acts as an example for the idea that being homosexual doesn't define who you are; you do.

It's widely believed that football is basically too manly to have any players who are gay.  Recently 49ers defensive back Chris Culliver stated in an interview that, "We ain't got no gay people on the team.  They gotta get up out here if they do.  Can't be with that sweet stuff. ... Nah, can't be ... in the locker room, man."  And as well spoken and extremely interesting as that may be, it's most likely completely false.

You hear different numbers, but a significant portion of Americans are homosexual.  Some studies show that 10% of men are gay, while others show that 4% identify as gay, lesbian, bisexual, or transgendered.  So, for argument's sake, let's just say that one in every twenty Americans is homosexual.  When opening day comes, there will be 1,696 players on active rosters in the NFL.  Throw in players on practice squads and you have about an even 2,000.  Now, that's not counting coaches, free agents, office staff, trainers, owners, etc., that's just players.  If we accept the 5% number, that's roughly 100 gay players in the NFL each season.

Now, someone might argue that professional football attracts less homosexual men than professions like fashion design or musical theatre, and while that's purely a stereotype it's most likely accurate.  So pare that 100 down to 50, or even 25, or even 10, but the fact remains that there are gays in the NFL.  There are gays in the NBA.  There are gays in sports.  Chris Culliver might not believe it, but just ask Jason Collins; it's true.  American sports is the next battleground for equality; the only reason it isn't right now is because no one has come out.  But today someone did, and soon more men will open up to their teammates and admit that they are gay.  I have hope that having an open locker room will be a positive thing, and that the transition will be smooth, but it's hard to tell.  I guess we'll see what the response is like in the NBA, and whether Collins ever gets a job offer again.
Posted by Olie Coen at 3:46 PM