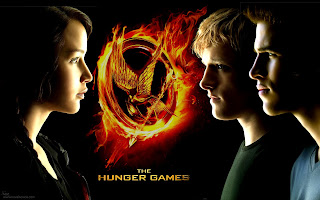 
I was a big fan of Jennifer Lawrence before this movie came out.  I loved her in Winter's Bone and she did a good job in The Burning Plain as well.  The same goes for Josh Hutcherson; he was solid in both Journey to the Center of the Earth and The Kids Are All Right.  And I feel slightly sheepish in saying this, but I read and enjoyed The Hunger Games trilogy.  No, they weren't amazing, but they were entertaining, and I often reminded myself that they weren't written with me in mind, because I'm not a tween.  Perhaps the plot was far superior to the writing, and perhaps I'm a sucker for a cool dystopian future, but I did read them all quite quickly and found them to be fun to read.  Now, the movie version of a popular kids' book series is hard to pull off.  They might have done it well with Harry Potter, but that franchise is one in a million.  I was skeptical that anyone could pull this project off without making it laughable, but I've got to say I didn't laugh much, and, as with the books, I found myself enjoying something that wasn't even aimed at me. 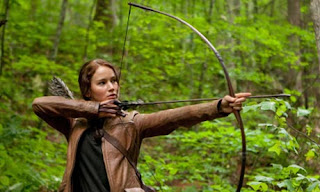 First, a little background on our world in the near future.  The United States at some point became highly centralized and military, exhorting its power over its people quite harshly.  A rebellion began across the entire nation, with full-scale war waged between the Capitol and the populace.  The government won.  Now, in the new nation of Panem, the Capitol reigns supreme.  The land has been divided into twelve districts, each with a specific job (mining, fishing, industry) and each district is entirely isolated from the next.  Great fences circle each area, military presence is constant, and food is short.  In order to keep the people from ever rebelling again the government has created an annual event meant to remind the people of their failure and their punishment; the Hunger Games.  Each year a boy and a girl from each district are chosen at random and sent into an arena to fight to the death.  Only one survivor comes out, to be revered and pampered for the rest of their lives.


On the eve of the beginning of the 74th annual Hunger Games, a young girl from District 12 named Katniss Everdeen is faced with her worst nightmare; her younger sister is chosen for the Games.  Katniss does the unthinkable and volunteers, taking her sister's place.  Along with a boy named Peeta Mellark, she travels to the Capitol to train, interview, and prepare for what will most likely be her death.  Should she survive, she will be famous and wealthy, her family never having to starve again.  But in order to live she must first win the hearts of the masses, for it is they who decide which contestants are favored in the games and which are maligned.  Katniss and Peeta begin to work together, all the while knowing that there can be only one winner, only one survivor of the Hunger Games. 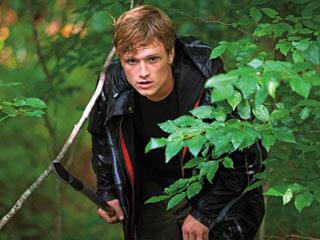 Pretty cool stuff, as far as the set up goes anyway.  The plot is driven by this insane system and it's murderous tradition, and I became quickly immersed in the land of Panem.  From the very beginning of the movie you can feel the seething anger and sad resignation of the people in the Districts, as they have about as much chance of living a happy live as a Hunger Games contestant has of survival.  The Games become a representation of their violent lives and pointless struggle, as well as a reminder of the horrible power of the Capitol.  Suzanne Collins only wrote three books in her series, but I would have read more, because the world she created is so very captivating and intriguing.  The film settles right into this place, and buries itself deep within the feeling that she created in her novels.


Now, as far as the movie goes, it wasn't perfect.  While the books lack great writing the movie lacks great acting, and that's pretty hard to overcome.  The beginning was good, I was in, but then the actors started talking more and more and it went downhill.  Lawrence was strong as the emotionally scarred Katniss.  And Hutcherson was passable as the compassionate Peeta.  But the side actors were all fairly silly.  A drunken Woody Harrelson, an over-the-top Elizabeth Banks, a distracting Wes Bentley (the weird boy from American Beauty), an unnecessary Lenny Kravitz, and a blah Donald Sutherland; none of them really made a good impression.  The only side character that I enjoyed was Stanley Tucci as the MC; he was hilarious and spot on.  But I kept getting lost in the mediocre acting and couldn't find my way out.


I can see why the movie was a hit, what with the big following that the books have, and with a storyline that's too cool to mess up.  The acting got in the way from time to time, but overall I enjoyed it for what it was and tried not to judge it too harshly.  After all, The Hunger Games weren't meant for a grown man, they were meant for a tween girl.  Regardless, I enjoyed the film version almost the exact same amount I enjoyed the books, and I never felt like I was wasting my time.  Don't expect too much and you'll have an enjoyable evening.