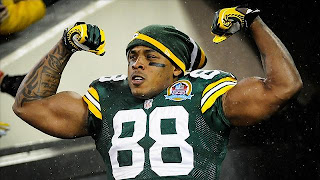 I was on NFL.com today checking on the off-season news and I stumbled upon some comments by Green Bay Packers tight end Jermichael Finley.  First off, Jermichael is a horrible name.  I am all for progressive thinking, hell my name is Olie, but Jermichael isn't a word, it's a sneeze.  Secondly, Finley is an OK player.  Check his stats here.  He started in 2008, had a break out year in 2009, an injury in 2010, a great season in 2011, and disappeared in 2012.  He had a lot of catches last year, but couldn't find the end zone.  Why not?  Because Rodgers doesn't trust him.  If you don't score touchdowns as a starting offensive member of the Packers, there is a specific reason.  The reason in Finley's case is that he can't be counted on in big moments, he lacks effort, he complains way too much, and he's generally not a very bright or arousing figure.

So Finley gets on the radio today and talks a little about his favorite person; himself.  You can read the article about it here.  Basically he says he wants his career to emulate that of Tony Gonzalez.  Umm, I'm more like Gonzo than you are, Jermichael.  He is one of the greatest tight ends in NFL history.  You are a mediocre, low-effort, high-smacktalk diva who comes across as the worst teammate there ever was.  Now obviously I don't know Jermichael Finley, he could be a volunteer at an old folks' home, do pottery to express his feelings, lead prayer groups in the locker room, I don't know.  But it appears as if he is dumb, selfish, whiny, and not a person that I'd want on my team.  Whether or not that's the truth is irrelevant.  Tony Gonzalez could be an axe-murderer, but come Sunday he is out on the field giving everything he has and that's what makes him great.  Jermichael, if you want to be just like Tony you should start by shutting up.  Avoid the media traps, practice until you faint, prove to Rodgers that you're not a complete moron, and help the Packers win a Super Bowl.  They are very close; maybe all they need is a solid tight end.
Posted by Olie Coen at 3:55 PM