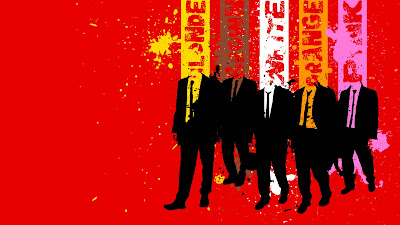 
Either you like Tarantino movies or you don't.  I'm not going to be insulting and say that they're all the same, but you know what to expect; blood.  His movies are violent, bloody, twisted, and full of psychopathic characters.  If you've seen Pulp Fiction, Jackie Brown or Kill Bill you know what I mean.  I had always heard that Reservoir Dogs, which was his first feature film, was one of his most gruesome and unpolished.  But I was surprised to find it so cool, crisp, and calculating.  And yes, bloody.

The story is of a robbery gone wrong.  A group of professional thieves come together under the leadership of Joe and his son Eddie.  They are each given specific jobs and code names: Mr. Blonde, Mr. White, Mr. Pink, Mr. Orange, etc.  The plan is simple; rob a jewelry store of its new shipment, meet at a warehouse, and separate as rich men.  But, of course, things do not go as planned.  As the shit hits the proverbial fan, the situation quickly turns into every man for himself, as no one can be trusted, and no one is sure to make it out alive.

From the very beginning, Reservoir Dogs was pumping.  The movie was only ninety minutes, and it always felt quick and decisive.  Yes, it was gruesome, but no more so than any crime/action/thriller, and at least the violence had a point; to show just how basic humans can be.  The acting was spot on, with top honors going to Tim Roth, followed closely by the surprising Chris Penn, with his chest hair and gold chain showing through his partly unzipped windbreaker.  All in all, a cool and interesting film that's a must see for Tarantino fans and most movie buffs.