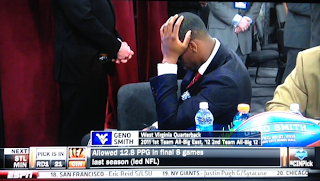 This is a part thought/part sports post.  Please forgive me for being NFL obsessed right now; with the Draft last night my thoughts are all football-oriented.  This weekend or shortly thereafter should see a a Movie Review and a DVD Review, so bear with me.

My thought today is on red flags in sports.  Not the literal variety, but the kind that pop up and give teams legitimate concerns over the character of potential players.  Take the Draft for example; these NFL scouts examine college players both physically and mentally, and they come away with a composite score, value, or desire.  Of course your college stats matter, your physical stats matter, your Combine times matter.  But what may matter most to a majority of teams is your character, your interview, and your reputation.

Fair or not, this is obviously true in this year's Draft.  Look at the players who fell: DT Sharrif Floyd, who should have gone #3 dropped down to number #23 because of concerns about rule-breaking in the past and whether he can be trusted to toe the line.  QB Geno Smith dropped completely out of the 1st Round partly because NFL teams are worried about his demeanor; he is seen as pouty and uninspired.  And LB Manti Te'o, who we all remember from his over-the-phone dating scandal, remains unpicked after he fails to impress in his last college game, at the Combine, or in interviews, and is commonly seen as having a weak character.

Teams want chemistry in their locker rooms, because chemistry leads to momentum, and momentum leads to success.  Look at teams that have failed with a club full of super-athletic divas; last year's Eagles, this year's Lakers.  You can't just rely on talent to win, you need leadership, cohesion, unity, passion, work ethic, and strong character.  The NFL knows this and they are drafting accordingly.  Geno Smith said he wasn't coming back to NYC for the 2nd Round after being snubbed in the 1st.  Hours later he comes out and says he is after all.  Why?  Because his agent is making him.  His agent knows that teams aren't just looking at his stats, they're looking at how he reacts under pressure and through adversity, because during the season, if he's a starting QB, he's going to see a lot of both.
Posted by Olie Coen at 11:37 AM