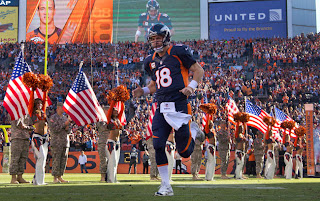 The NFL schedule was released for the 2013 season, and there are so many marquee matchups that I might not be able to stand it.  The Broncos, who are of course my team, have a very entertaining schedule, as does seemingly every club not named the Bills.  With the Draft coming up this Thursday and preseason just around the corner, I'm starting to get excited for what should be another excellent NFL season.  Check out NFL.com/schedules for a complete run-down, but here are a few of the meetings that I am most anticipating:

Week 1 - Baltimore @ Denver - Opening game of the NFL season and a re-match of an awesome playoff game.  How will Champ and Raheem Moore fair this time around?

Week 2 - Denver @ NYG - Manning Bowl!  Peyton has never lost against his little brother Eli and the Broncos will have extra time to prepare after a their Thursday matchup.

Week 3 - Houston @ Baltimore - Two of the elite AFC teams going head to head early on.  And with Ed Reed now a Texan, I expect a hard fought game.

Week 4 - New England @ Atlanta - This was almost the Super Bowl last year and it very likely could be this year.  Both teams will want to make a statement.

Week 5 - New Orleans @ Chicago - I really like both these teams this season, both should be improved and hungry.  Look for a high scoring game here.

Week 6 - Washington @ Dallas - RG3 should be 100% by this game, and Tony Romo should be fighting for respect as always.  I expect a slump by Griffin, but we'll see.

Week 7 - Denver @ Indianapolis - Peyton returns to Indy to face Luck.  I wouldn't mind going to this game; I think I could wear my Manning Broncos jersey and survive.

Week 8 - NYG @ Philadelphia - It'll be interesting to see what Chip Kelly has done with his team up to this point; we should know whether they can make this a good game or not.

Week 9 - Chicago @ Green Bay - It doesn't get much better than the Bears vs. the Packers on Monday Night Football in November.  I love watching games at Lambeau.

Week 10 - Dallas @ New Orleans - Rob Ryan should be coaching with a chip on his shoulder and I expect Romo to get sacked more than his fair share of times.

Week 11 - Minnesota @ Seattle - Might not look like an amazing game on paper, but I expect a ton of scoring and a wild game between to intriguing teams.

Week 12 - Denver @ New England - I know I've chosen a lot of Broncos games, but come on; Peyton vs. Tom, Welker returning to face the Pats, a possibly AFC Championship preview.

Week 13 - Pittsburgh @ Baltimore - What a great Thanksgiving night matchup.  Should be low scoring, smash-mouth, and down to the wire; what else could you want.

Week 14 - Indianapolis @ Cincinnati - These teams match up well, and it should be a very even contest.  It's not a night game or anything, but should be fun to watch.

Week 15 - Washington @ Atlanta - I just love watching Matty Ice throw the ball, and of course RG3 is one cut away from either scoring a TD or breaking off his leg.

Week 16 - New Orleans @ Carolina - The Panthers could be clawing for a playoff spot this week, and Cam might be up to the challenge of knocking off Brees and the Saints.

Week 17 - Detroit @ Minnesota - In the last week of the season you're just looking for who has something to play for, and this game could have two teams fighting for survival.
Posted by Olie Coen at 3:35 PM